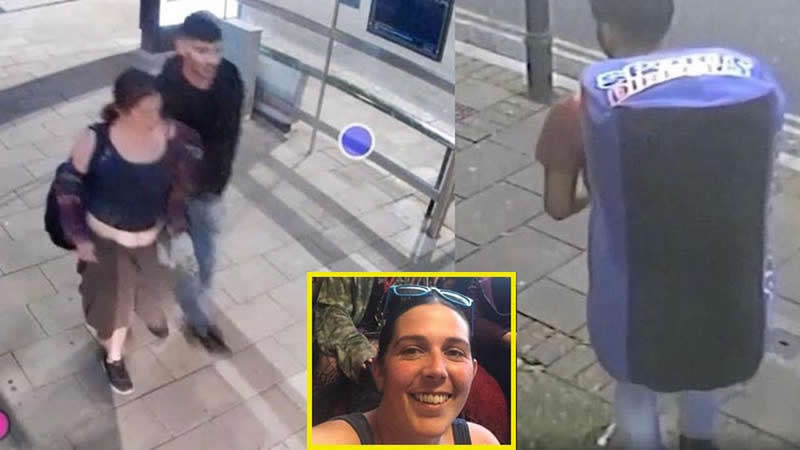 Chilling CCTV shows murderer Azam Mangori leave his flat with the mutilated body of his victim Lorraine Cox in a Sports Direct bag.

Mangori, a 24-year-old shop worker, killed Exeter woman Lorraine then butchered her body, disposing of her remains in bins at the back of the building and woodland outside the city, Devon Live reports.

A jury at Exeter Crown Court returned a guilty verdict at the end of a trial lasting five weeks.

The evidence focused on whether Lorraine, a Type 1 diabetic, died a natural death as a result of a medical episode combined with heavy drinking or whether Mangori, a loner with an online gaming obsession, was a cold and calculating killer who harboured dark fantasies about amputation.

Mangori, who is also known as Christopher Mayer, encountered Lorraine as she was walking alone in the early hours of September 1 last year.

The pair returned to his flat and he killed her soon afterwards, probably by suffocation.

Mangori kept Lorraine’s body in his room above the Bodrum Kebab House for a week before carefully dismembering it and wrapping the remains in bin bags.

He pretended she was still alive by hacking into her online accounts and sending messages to worried family and friends that she had moved to Plymouth.

The killer was caught after a police investigation found CCTV which showed him stalking Lorraine along Exeter High Street and talking to her.

During the trial, the prosecution also relied on DNA evidence, phone analysis, internet history and toxicology tests on Lorraine’s remains to prove he was guilty of murder.

Mangori pleaded not guilty to murder but admitted a charge of preventing Lorraine’s lawful burial.

He will come to court next week to be sentenced.

Lorraine had spent the Bank Holiday Monday drinking and socialising with friends on Exeter quay and at The Arcade pub on Fore Street.

She had arranged to spend the night at the home of a female friend but the pair had become separated shortly before closing time.

She declined the offer from another friend to pay for a taxi and decided to walk to her father’s home in Beacon Heath.

It was agreed she was very drunk.

Just after 2am Mangori left his flat above the kebab shop at the corner of Mary Arches Street. CCTV showed him with his hood up as he followed her along High Street. A few minutes later they could be seen talking.

The jury was played a 13-minute audio of a sexual encounter the pair had in an alleyway near John Lewis. The final sighting of Lorraine was at 2.45am when she and Mangori went to his room above the kebab shop.

Mangori claimed Lorraine had collapsed suddenly and died after they returned to his flat, had sex twice, smoked, listened to music and drank alcohol.

He said Lorraine produced some drugs which she smoked from silver foil in her hand.

He inhaled the smoke too and felt sick. He told the jury he lay on the bed to steady himself and may have drifted off.

When he woke he said Lorraine had collapsed on the floor.

Mangori said he tried to resuscitate Lorraine using CPR but could not revive her. He said he panicked, wanted to run away, and even hallucinated about creatures in the room.

Rather than call for help he blacked out and hoped it had all been a nightmare.

The prosecution said his behaviour in not getting help, pretending she was still alive and shamefully cutting up her body, helped to prove he was a callous and meticulous killer and not a panicking young man who was not in control of the situation.

Mr Justice Garnham told him: “This matter will now stand adjourned till 2pm on Wednesday when we will reassemble for the purposes of sentence.”

Donald Trump may soon have to answer rape allegations under oath