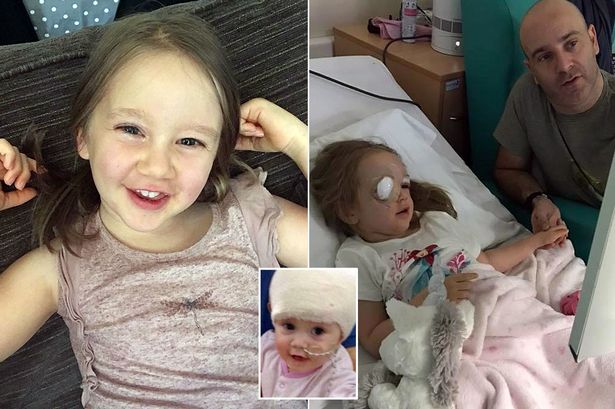 A girl’s sight was saved in a “surreal” operation when surgeons took a nerve from her leg and grafted it to her eye.

Lucy Needham lost feeling in her right eye as a side effect of treatment for a brain tumour aged 10 months.

Now seven, she has had a pioneering procedure called a corneal neurotisation – in which a nerve from the calf is connected in the face or neck to give sensation in the eye.

Mum Tracey Evison, 41, said: “When we heard what the procedure entailed, it sounded quite surreal. But we wanted to give her the best possible chance of a normal life – and knew this was a time-sensitive decision to ­ensure her sight did not get damaged beyond repair.

“It’s been a rollercoaster of emotions but now Lucy is like a different little girl. She has far fewer infections and drops and is back to doing the things she loves most, like swimming.”

Lucy became only the third Brit to have the operation a year ago, at Birmingham Children’s Hospital.

Since then, nine more people have had the procedure there. And medics say dozens more who have lost feeling in their eyes due to cancer, genetic conditions or trauma could benefit from the treatment every year.

As a baby, Lucy had a brain tumour removed and months of chemo. But it was not until she was four that Tracey and Lucy’s dad Paul Needham, 43, noticed her eye problems.

Tracey, who runs a baby-toddler class business, said: “Lucy would poke herself in the eye and it wouldn’t hurt her. She had constant infections.

“We noticed her pupil had shrunk and her eye was red so we got her seen urgently, ­fearing a relapse.”

Lucy was dignosed with corneal anesthesia and finally had her op in October last year – weeks after starting school. It involved grafting a nerve from the lower leg and connecting it to a sensory nerve in the face or neck.

The other end of the graft is split into tiny fibres and tunnelled around the cornea – eventually prompting new fibres to grow and supply it with a protective sensation.

Lucy spent one night in hospital for the six-hour op and two weeks recovering at home in Chesterfield, Derbys.

Tracey said: “Lucy has had so many procedures already, so she took this in her stride. We’re so appreciative of the outstanding care the surgeons gave Lucy. We hope her story will encourage further research so others can receive the same treatment.”

Consultant ophthalmic surgeon Manoj Parulekar said there had been a “huge improvement” in Lucy’s ­quality of life.

He added: “It took a long time, over one year, for the nerves to fully establish the connection with her eyes, which is not unusual.

“This treatment would be expected to give Lucy a lasting result.”

How to Fix a Bad Haircut?