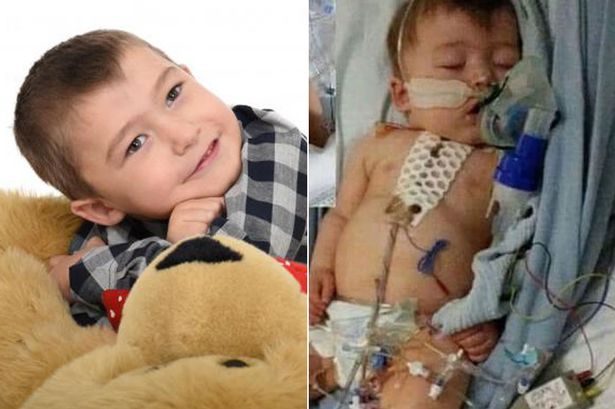 Maxen Shaw has faced open heart surgery and risked to lose his life on several occasions.

His mum Caroline Shaw has now spoken out to raise awareness of another condition, 22q, also known as DiGeorge Syndrome, Lancs Live reports.

The disorder is caused by a small missing piece of the 22nd chromosome and can affect every system in the human body.

It is believed to be the second most common genetic disorder behind Down’s Syndrome, but despite this it is still not widely known.

Mum Caroline, from Baycliff, Cumbria, said: “Our journey started in 2013 with a very difficult fourth pregnancy with a high volume amnotic fluid.

“Extra scans were carried out and I later found out that this can be an indication of heart problems with the baby.

“Nothing was found however and I was induced early but ended up with an emergency C-Section.

“Three days later Maxen was discovered to have a heart murmur and ticks which turned into seizures and he was classed by doctors as ‘not compatible with life’.

“But after further intensive scans it was confirmed he had ToF (tetralogy of fallot; 4 heart defects).

“He also had a fifth heart defect which can’t be operated on and this is when our journey really started.

“He was diagnosed with 22q deletion/ Digeorge Syndrome and 15q duplication.”

The first year of Maxen’s life saw him attending hospital many times, having numerous appointments and sleepless nights.

His first open heart surgery was nothing short of a nightmare for his family.

His operation went well however he caught two nasty viruses, had seizures and had a huge bleed out resulting in the crash team working on him to save him which required an emergency operation and blood transfusions.

Caroline said: “Nearly six years later we still have lots of hospital appointments and daily medications. He continues to have complex problems associated with 22q but he is thriving.

“He’s thriving because he has an amazing health team behind him. He is the most lovable, happy little soul!

“Maxen is due more open heart surgery and we dread having to experience that again with what happened last time, but he needs this to keep him alive so we have no choice.

“I’m sure Maxen will face more challenges in life but we will be here to support him along the way.

“We also want to help spread awareness as we believe this is key with this syndrome.”

They have three other children Jamie, 15, Olivia 13, and Daniel nine with Maxen being the youngest.

A well-known landmark and iconic cafe in Ulverston lit up its premises in red on Sunday in order to raise awareness of Digeorge Syndrome.

The Hoad and the Round House Cafe and Hub in Ulverston agreed to the gesture to support Maxen and his family.

A charity that supports families with 22q/Digeorge Syndrome is UK-based Max Appeal which asked its members around Europe to light up places in red on Sunday to raise awareness of the condition.