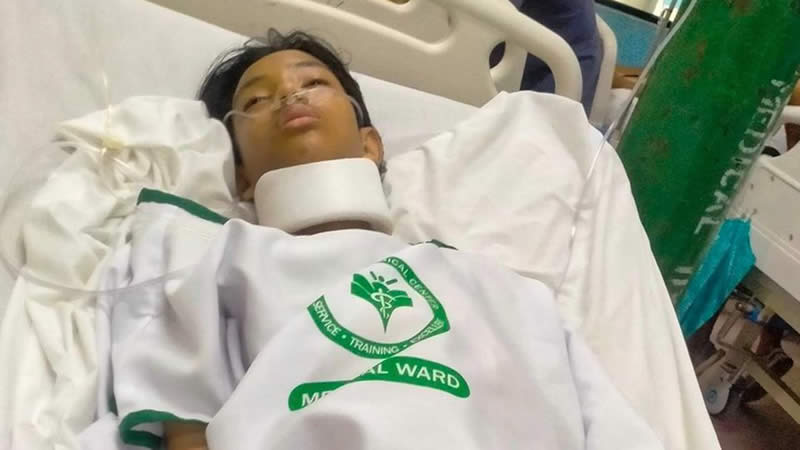 During Halloween celebrations in the Philippines, a young boy was flung from a high-speed carousel and hit a steel pole, losing a lung.

On November 1, Mark Fajardo, 13, was riding the ‘wave swinger’ ride in Urdaneta City, Pangasinan province, Philippines, when the ride began to accelerate.

Onlookers screamed in delight at how exciting the ride appeared, but their shrieks were quickly replaced with cries when Mr. Fajardo was thrown from his seat and slammed into a set of steel grills with a loud crash.

Bystanders rushed to the scene, and he was quickly admitted to the hospital with serious injuries, but miraculously survived the ordeal.

Mark survived, but his family said he needed a pneumonectomy to remove one of his lungs as a result of the impact.
His mum Marivic Fajardo said: “Doctors told me he had to be careful since he now only has one lung left.

“I hope the operators won’t make up stories. They’re blaming my son, saying he removed the lock. Why would he do that when the ride was going so fast?”

Officers are now investigating the ride to determine why it malfunctioned, according to Police Major General Ria Tacderan, and the attraction has been suspended while investigations are ongoing.

If safety violations are found, the fairground may be forced to close, according to police.

The policeman said: “Our problem now is to see if anyone is monitoring or checking the rides before they are used.”
The news comes just a month after terrified theme park visitors were suspended in the air for about 30 minutes after a new £3 million ride lost power.

Speaking about the “trip” mechanism protecting the power transformer, the park’s owner Henry Danter said: “We had a new transformer in and there was a trip on it.

“I don’t think the trip was set high enough.

“Maybe all the rides went on at the same time and it wasn’t set high enough for the new rides that had come in. We’ve got a bigger trip going in next Wednesday or Thursday.”

One person who was present at the time said the people on the ride were “terrified.”

Mr. Danter said: “People get petrified on these rides anyway — that’s the kind of rides they are.”

Meghan Markle Plans To ‘Rethink Parenting Style’ For This Reason

REPORTS: The Nightmare COVID Variant That Beats Our Immunity Is Finally Here