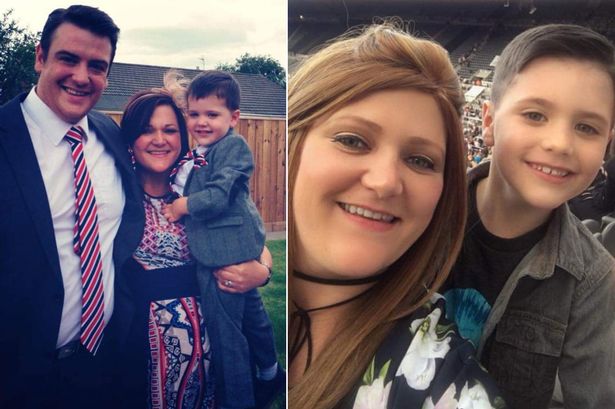 An eight-year-old boy has been left orphaned after his mum died of terminal cancer just years after he tragically lost his father.

Vicky Myers, 35, courageously battled the disease and did everything possible in her final months to make more memories with her son William, whose dad John died in 2015.

Leaving William without a parent was her “biggest fear” and, while undergoing gruelling treatment, she “hung on as much as she could” to have more time with him, including one last Christmas at home, said longtime friend Lorraine Mulgrew.

After beating triple-negative breast cancer and just days after her own father died, brave Vicky was given the devastating news in February last year that the disease had spread through her body and she had as little as three months to live.

The mum, from Thornaby, North Yorkshire, had survived with incurable cancer for almost a year when she lost her fight on January 11.

It came just over two weeks after one final Christmas with her son and her retired mother Janet, who is now caring for William with her husband (Vicky’s stepdad) Keith.

“That was her biggest fear, leaving William without a parent.

“She’s the most courageous person I have ever met.

“Everything that she went through, it was all for William.”

Lorraine, who has set up a JustGiving page to support William, added: “He is struggling, as anybody would.

“He just lost his mum and is facing life without his parents.”

The boy’s father, musician John Myers, was only 32 when he died tragically in 2015. John and Vicky met almost 15 years ago while he was performing in Thornaby.

Two years after his death, Vicky, who worked as a receptionist at a GP’s surgery until her terminal diagnosis, discovered a lump in one of her breasts.

After gruelling rounds of treatment, scans didn’t show any signs of cancer.

But she started having pains in October 2019 and collapsed in February 2020. She was told that she had terminal cancer after scans showed tumours in her liver and rib cage.

Lorraine said: “Vicky had the most horrendous year last year. Her dad passed away quite suddenly and literally within a week or so she was diagnosed with terminal cancer.

“She had breast cancer in 2017 and went through really difficult chemotherapy, radiotherapy and an operation to take tumour away.

“It didn’t get rid of it all and it was still in the lymph nodes and they had missed it.

“Last year, she collapsed in pain and was rushed to hospital, and that’s when they found that the cancer had come back with a vengeance.

“It was in her liver, it was everywhere.

“They said, ‘you’ve got three to six months to live’, so she did everything she could to get extra time with William, because his dad had passed away quite tragically.”

Lorraine added: “She went through more rounds of chemotherapy just to do all she could to make as many memories as she possibly could with William.

“She battled through all the pain and I think she tried to get herself through Christmas to give him one last Christmas, the best Christmas she possible could.”

Vicky was due to start a new round of chemo on January 11, the day she died in her mother’s arms, but it was decided the day before that the treatment shouldn’t go ahead because nothing else could be done, said Lorraine.

In one of her heartbreaking final acts as a mother, she prepared William for her death and told him the truth when he talked about her getting better one day.

Lorraine said: “Vicky did an amazing job preparing him for what was going to happen.

“She went through bereavement for children when her husband passed away, so she knew what to expect. She gave him the facts.

“She did such a good job of doing it, but as good as she did nobody can prepare you for losing a parent and losing a mum so young.”

After she was diagnosed with terminal cancer, Vicky told TeessideLive in March last year that her priority was to make sure William would go on to live a “normal and happy life” without his mum and dad.

Vicky, whose funeral is being held on January 29, had support from a number of charities, including Butterwick Hospice and the Solan Connor Fawcett Family Cancer Trust.

Her mum, now facing the task of raising her grandson, was her “rock” and was with her until the very end.

Lorraine said: “She hugged Vicky and held her until her very last breath.

“Her mum was by her side constantly throughout.”

In her final months, Vicky did what she could to make her last moments with William memorable ones, although the Covid-19 pandemic meant she had to shield and lockdowns interfered.

Lorraine said: “Covid threw a huge spanner in the works because she wanted to do things like Legoland, he wanted to go to the Natural History Museum.

“William really wanted to go to Battersea Dogs Home to donate his pocket money to the charity because he loved seeing Paul O’Grady and the show that he does.

“She desperately wanted him to go there and do that memory with him, but Covid hit and it just wasn’t possible.

“In between lockdowns she was able to take him on a couple of family breaks including a caravan holiday.

“She did what she could do at home, hiring him a bouncy castle in the summer, buying a snooker table so they could play together.

“She did everything to make as many memories as she could with him.”

Lorraine, who is sharing Vicky’s story to raise funds for William and awareness about checking for breast cancer, said she’ll cherish one of her last outings with her late friend.

The Solan Connor Fawcett Family Cancer Trust paid for an overnight spa break for the two of them to give Vicky a lift.

Lorraine said: “We had the best time, it was so nice. She was so grateful for everything they did and they will still support the family now.”

She added: “I want to do anything I can to make things easier for (William and his grandmother Janet) and lessen any bit of a burden that I can, do to what I can for Vicky’s legacy.”

The JustGiving page states: “As many are aware the most courageous woman I’ve met, Vicky Myers, lost her battle with cancer on 11 January 2021 aged only 35.

“She fought so hard to the bitter end and has left behind so many brokenhearted family and friends.

“She was absolutely devoted to her son William aged eight and did everything she could to spend as much time as possible with him until she was no longer able to fight.

“William was only two when his dad died suddenly and is now left with no parents.

“Vicky’s mam Janet who was at Vicky’s side until she took her last breath made a promise to Vicky that she would care for William the best she could.

Melania Trump Sent one Last Message with her Exit Outfit