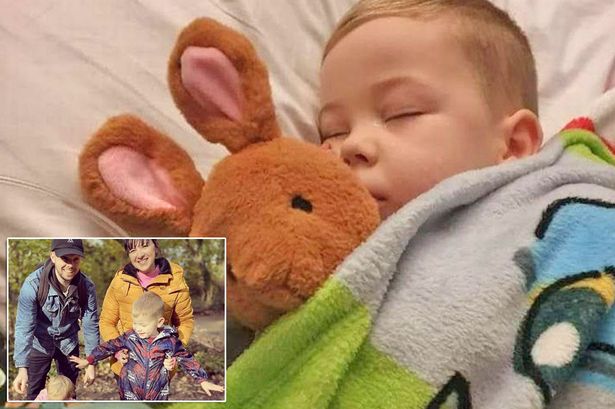 When four-year-old Jaxson Clark’s parents took him to the GP with aches in his legs she was assured they were only growing pains.

Mum and dad Sophie and Mitch, from Yate, South Glos, gave him Calpol to ease his pain, but after several days Jaxson’s neck swelled up, and he was rushed to A&E at Bristol Children’s Hospital.

There they received the horrifying news that he had Acute lymphoblastic leukaemia.

Because of coronavirus restrictions, Sophie was alone in the hospital when she heard the news.

She told Bristol Live : “It was heartbreaking to hear, I was by myself and had to call Mitch to tell him.

“He was allowed to come in and see us, before Jaxson was taken up to the oncology ward.”

Jaxson started chemotherapy straight away, which has left him nauseous, fatigued and unable to walk.

His hair has fallen out, and Sophie has to use a pushchair to wheel him around until his core strength returns.

“As you can imagine our whole world has been turned upside-down and his battle has only just begun,” said Sophie.

“Every sector of the children’s hospital have been amazing, not just for Jaxson, but for us as well, and we can’t thank them enough.

“He’s been responding really well to the treatment. They said it was lucky we caught it so early.

“All being well he should still be able to start school this September.”

Since November he has been admitted to hospital twice, including once over Christmas.

“He got home in time for his 4th birthday which we were really happy about,” said Sophie.

“He still had Christmas presents left so he had a pile of birthday presents on one side and Christmas on the other.”

Sophie has called for all families to get their kids checked out if they are worried about their health.

“If you feel your child isn’t right, don’t take no for a answer, you know your child best,” Sophie said.

“Give them a cuddle and hold them close, as you never know what tomorrow will bring.

“We have a long way to go on the road to recovery but with the amazing staff at Bristol children’s hospital and the support of our friends and family, he will get through this.”

Doctors have warned the family that Jaxson’s treatment could last three-and-a-half years.

Their family have launched a GoFundMe page to help them financially while they care for their son.

Father Mitch is a self-employed chef, but he has been unable to work due to the pandemic and hospital appointments.

Their GoFundMe says: “With no financial support they will lose the house that they have spent two years building into a wonderful safe family home.

“Please help support them to take the worry of the house, the bills and every day life that we would take for granted. Please help me to support them so that they can concentrate 100 per cent on Jaxson, to able to process all the information being thrown at them daily.