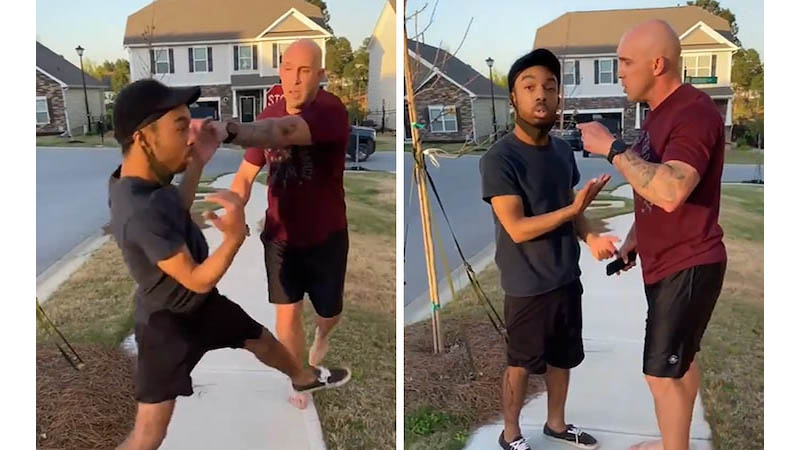 A soldier has been arrested and charged after video showed a Black man being accosted for being in the “wrong neighbourhood.”

Jonathan Pentland, 42, was captured on camera confronting the young man and shoving him on the street in Summit, South Carolina.

“The first time I saw the video, it was terrible,” Richland County Sheriff Leon Lott said at a press conference Wednesday evening. “It was unnecessary. It was a bad video — young man was the victim, the individual that was arrested was the aggressor, and he’s been dealt with accordingly.”

Pentland, who is a United States (US) army soldier assigned to Fort Jackson, was arrested at 8:30 on Wednesday morning and was booked at the Alvin S. Glenn Detention Center. If found guilty, Pentland faces a $500 fine and 30 days in jail.

In the video, posted to Twitter, the man, identified as Pentland, is seen confronting a Black man walking down the sidewalk and yelling at him to leave the neighborhood. Pentland shoves the victim and yells and curses at him: “You better start walking right now. You’re in the wrong neighborhood, m—–f—–. Get out!”

The family of Johnathon Pentland has been moved from their home due to protesters vandalizing the home, according to the Richland County Sheriff’s Office.

Deputies were sent to the home around 8:20 p.m. Wednesday night, according to the department. The department said the peaceful protests have become violent.

Due to the criminal activity, deputies have closed access to Barony Place and surrounding street expect to residents, according to the department.

However, the family has been moved to an undisclosed location.

Fact Check: Biden Said People Who Are Not Fully Vaccinated Can Still Die Every Day