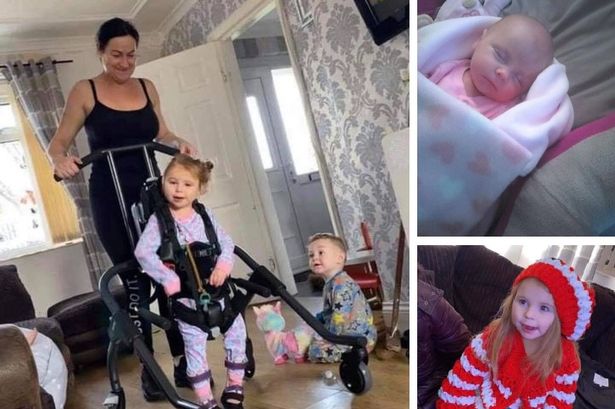 A four-week-old baby ‘died twice’ after developing meningitis and is now living with cerebral palsy after a fight to save her.

‘Perfect’ Sadie Rose Hunt was born at 34-weeks weighing 5lb 13oz, but just four weeks later she was rushed back into hospital.

After long hospital stays, the tot was placed into a coma and intensive care, and the family were told Sadie “wouldn’t be the same person” and was later diagnosed with cerebral palsy.

Her mum Lisa Hunt said she had had a normal pregnancy and gave birth to her baby girl on January 31, 2017, Teeside Live reports.

But at about four-weeks old Lisa noticed that something wasn’t right and spotted a ‘soft spot bulging’ before calling for paramedics.

The baby was taken to a hospital in Middlesbrough for emergency treatment.

Lisa said ‘the first 24-hours were critical’ and that she watched as doctors were ‘pumping her chest’ as she had ‘died and they brought her back.’

Sadie’s condition deteriorated further and she was transferred to Newcastle’s Royal Victoria Infirmary where the baby was placed into intensive care and a coma.

Following a number of tests, the doctors confirmed Sadie had contracted meningitis – an infection of the protective membranes that surrounds the brain and spinal cord.

It can affect anyone but is most common in babies, young children, teenagers and young adults. Meningitis can be very serious if not treated quickly.

The 46-year-old mum of three from South Bank said health professionals estimated she had the infection for around 12-hours and the mum calling for help could have saved the youngster’s life.

Sadie stayed in intensive care for four weeks in hospital and it was there that she ‘died’ a second time after she stopped breathing while doctors were carrying out tests.

Lisa described the moment of seeing doctors rushing into the room to her little girl as ‘petrifying.’

She then went onto a ward but doctors found that she was showing signs of cerebral palsy.

On being told that Sadie wouldn’t be the same person she was when going into hospital Lisa said: “I don’t care what’s wrong with her, she’s still my daughter.

Sadie, who is now aged three, is described as a ‘determined little girl’ who is ‘always giggling.’

Lisa, who is her full-time carer as she is unable to talk or feed herself, added: “Everyone who sees her falls in love with her big smile.

“She’s that type of person that lights up the room.”

Forgiving student loan debt is a no-brainer, and Biden could do it tomorrow if he wanted to