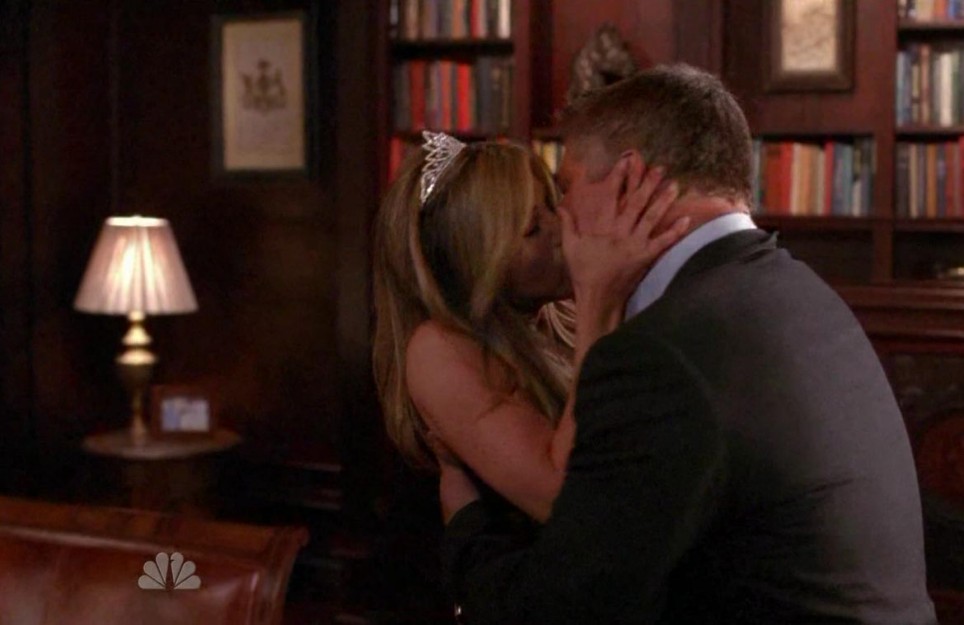 ****Ruckas Videograbs**** (01322) 861777 *IMPORTANT* Please credit NBC for this picture. 14/11/08 Jennifer Aniston in NBC 30 Rockwith Tina Fey and Alec Baldwin. Jennifer plays a crazy college friend of Liz Lemon (Tina Fey) who slepts with her boss Jack (Alec Balwyn) and ends up stalking him. Office (UK) : 01322 861777 Mobile (UK) : 07742 164 106 **IMPORTANT - PLEASE READ** The video grabs supplied by Ruckas Pictures always remain the copyright of the programme makers, we provide a service to purely capture and supply the images to the client, securing the copyright of the images will always remain the responsibility of the publisher at all times. Standard terms, conditions & minimum fees apply to our videograbs unless varied by agreement prior to publication.

Alec Baldwin says it was painful kissing Jennifer Aniston back in the days for a reason.

Alec Baldwin and Jennifer Aniston worked together when the latter guest-starred in one episode of 30 Rock. In their scene, Baldwin kissed Aniston, but he seemed not pleased with the experience, even calling it “painful.”

Alec Baldwin, 62, had the chance to work with Jennifer Aniston, and they shared a kiss in one scene. But while most men would kill to be in his place, he wasn’t really pleased with his kissing experience with the Friends alum.

Apparently, Aniston used to function on coffee and cigarettes, and that was what made the whole kissing scene, not a please experience for Baldwin. It was not the first time Aniston’s co-star opened up about the same incident, Jason Bateman also complained and had to stop a kissing scene because of the cigarette and coffee smell, Pinkvilla reported.

Jennifer Aniston is now a beacon of health and fitness. The Murder Mystery star had successfully quit caffeine and smoking, which caused her unpleasant odor back in the days. She reportedly uses yoga to curb and gave up those things.

Aniston was photographed years ago holding a fag in one hand while hugging her then-husband. However, had successfully stopped smoking for good in 2011. But it was not an easy journey for the actress who had been wanting to quit smoking since 2002 because it took almost a decade for her to quit smoking.

Last year, there were rumors that Jennifer Aniston was heading for a breakdown because she was pushing herself too much while working on The Morning Show and waiting for the upcoming Friends reunion. Her busy schedule allegedly took a serious toll on her health.

Also, Aniston was allegedly pressured to always look her best and put on a brave face. All of those things plus the long working hours had been to much for her, according to tabloids.

However, the report was not true. Aniston’s rep confirmed to Gossip Cop that she was happy and healthy. The report claiming she was too weak to handle pressure was also false.

Coronavirus symptoms: 3 strange body changes to look out for – including Covid tongue