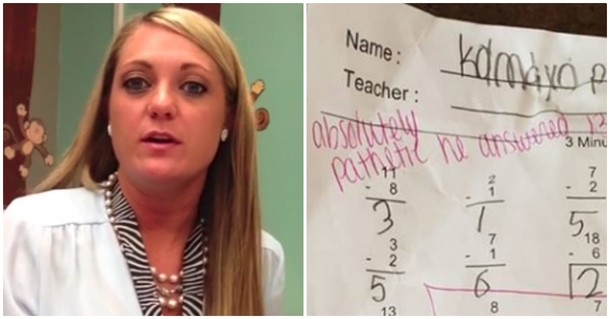 A Pennsylvania teacher, Alyssa Rupp Bohenek, who wrote ‘absolutely pathetic’ on a second-grader’s test is facing calls to be fired after the boy’s father shared her remarks on Facebook.

According to the details, 7 year-old Kamdyn Piland’s quiz had the words “absolutely pathetic” written across the top of his paper. Kamdyn attends Valley View Elementary School, and the notation on the quiz also noted the boy “answered 13 in 3 min! Sad.” A drawing of a sad face was next to the note.

Posting a photograph of Kamdyn’s test, Chris wrote: “My son Kamdyn’s teacher has been so rude to him and myself all year he comes home with this and I am beyond frustrated that someone would write this on a childs work such great motivation.”

It is to be noted that teachers are considered to be our children’s substitute parent at school since not only are they supposed to provide quality education, they’re also there to provide support to each child’s well-being.

A petition calling for Bohenek’s firing has collected more than 18,400 signatures.

The petition’s creator wrote that Bohenek “is a teacher for the Valley View School District that thinks it’s OK to bully and talk down to her students, and needs to be removed.”

A petition calling for the teacher to keep her job has more than 930 signatures. “What she wrote on the student’s paper may have been wrong to do. It is something she should reprimanded for, but certainly not fired over,” the petition’s creator wrote.

However, Valley View Superintendent Rose Minniti said that the district is investigating, calling it a personnel issue that will not be dictated by social media.

What are your thoughts on the teacher’s comments on this 7-year-old’s math paper?

Killer parents ‘boiled’ toddler, 2, to death in water as punishment for soiling nappy