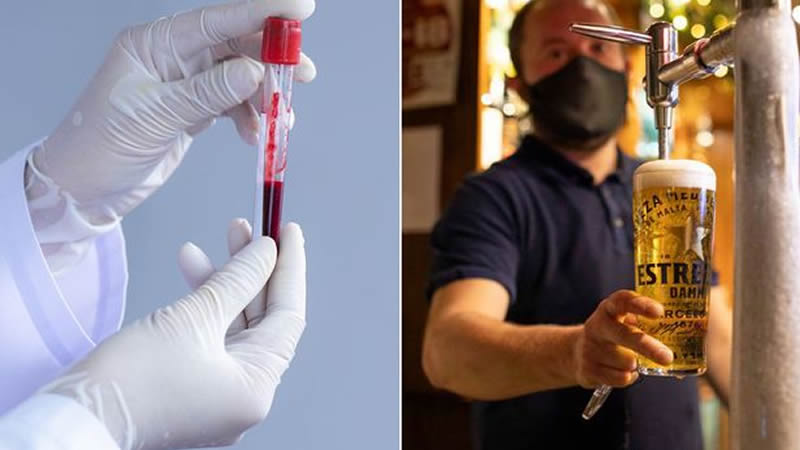 Pub goers itching for a pint at their local boozer could be forced to show a blood test just to get served, it has been reported.

Under plans said to be under consideration by ministers, punters may have to prove they are Covid immune to get a drink.

The Prime Minister triggered a furious backlash earlier this week when he suggested landlords could refuse to serve customers who had not been jabbed.

It raised the prospect of bar staff demanding to see punters’ papers before pulling them a pint.

Now, The Times reports that pub goers could be required to have an antibody test to prove they have had coronavirus.

This would involve taking a sample of blood for analysis, thereby proving some level of immunity to the disease.

Jonathan Van-Tam, the deputy chief medical officer for England, is reportedly in support of the idea of using the antibody tests as part of a certification scheme.

It comes after Boris Johnson said this week that vaccine certificates could be required in pubs.

But there was a furious backlash to the plans and the British Pub Confederation slammed the Prime Minister for ‘abdicating responsibility’ by leaving the decision on Covid vaccine passports to landlords.

Chairman and Campaign for Pubs campaign director Greg Mulholland told the Mirror: “Pubs up and down the country have been without income for many months and already have the real challenge of reopening with restrictions like outdoors-only opening and table service – things which make it difficult for many pubs to actually make a living.

“To now even suggest that pubs might take on the role of policing whether people have been vaccinated is both unfair and also absurd.”

In an effort to quell mounting anger, the Tory leader insisted the move would only come into force once everyone who wanted a Covid jab has been offered an injection.

The current estimate for the completion of the mass Covid vaccination projects is that all over-50s will be offered a jab by April 15, and then all adults by July 31.

All hospitality, including pubs and restaurants, have been shut since England’s latest national lockdown began in early January.

Currently, restaurants are allowed to be open for takeaway, but customers are not allowed to dine in.

April 12 is the earliest pubs and restaurants will open but only for outdoor service, and it won’t be until at least May 17 when indoor hospitality could re-open.

But customers will still have to eat and drink while seated.

Sore Eyes Could Be the First Sign You Have COVID, Study Says