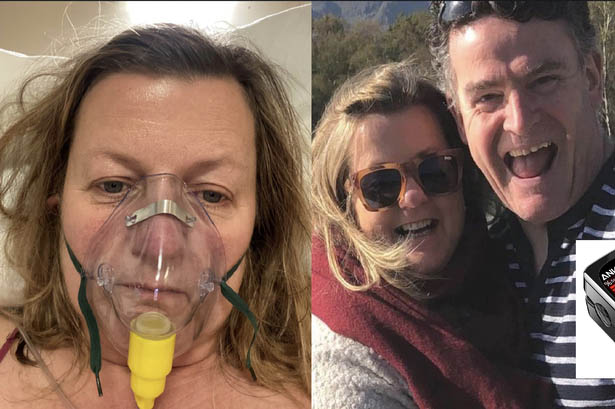 A mum who spent 12 days over Christmas Day and New Year in a Covid ward claims an Amazon oximeter saved her life.

Nikki O’Hara was rushed to hospital on December 23 after her husband Rodger contracted coronavirus and suffered mild symptoms.

The 53-year-old then decided to buy an oximeter from Amazon, which measures oxygen saturation levels, after friends told her about the gadget.

As Nikki began to feel sick, she began to monitor her results more closely, and after her symptoms got worse, Nikki called NHS 24.

Staff on the phone became concerned when she told them the results, the Daily Record reports, and Nikki was rushed to A&E at University Hospital Hairmyres.

Nikki said she couldn’t help but think “how am I here” as she lay in hospital as she felt as though she had been “pretty responsible” throughout the pandemic.

She said she became “wrapped up in fear” as she became increasingly ill and kids Katrin, 22, and Tom, 19, became “absolutely terrified.”

The mum said: “I spent Christmas and New Year there but I didn’t care. It was funny because I’ve a large circle of friends and family who wanted to keep my spirits up. They asked are you not bored?

“I wasn’t bored. I was just seriously ill.

“You couldn’t be bored because your head was so wrapped up in fear.”

While in hospital, the family suffered another blow after her husband’s dad, who had dementia, died from Covid on Christmas Eve.

Nikki said she felt “awful” she couldn’t support Rodger, but on January 5 she was allowed home to grieve and recover with family.

She said: “The night I went into hospital Rodger went down South to support his mum and his dad died the next day. We didn’t think Covid would kill him but it did.

“I’ve had over 20 bouquets of flowers, beautiful gifts and people dropping pf soup but even when people are at the door I’m really nervous – even the postman.

“I was really excited to get home but when I got home I was absolutely terrified. In the hospital all the staff and nurses were always there to support me but when I came home no one.

Nikki called the NHS “superstars” and begged people to follow the rules as she knows she’s “the luckiest girl in the world.”

She added: “I am still scared but know I am also the luckiest girl in the world. It will be a long journey both emotionally and physically, but I am alive and I am getting better every day. The virus respects no one.

“Young, old, fit, black, white. We are all vulnerable. We are all at risk and we need to take it seriously, every minute of every day.

“Stay at home if you can. Adhere to the government guidelines when you are out the house. Wash your hands thoroughly when you come home. Look out for the signs that you might have Covid.”

Beauty and health should go in hand

This new treatment may stop development of Alzheimer’s disease