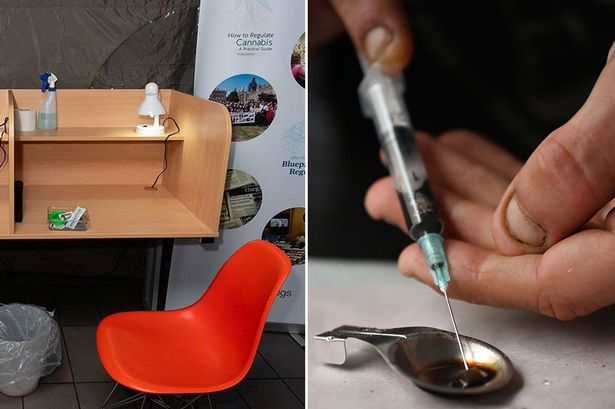 Bristol could become the first city in England with “safe injecting rooms” for heroin addicts to shoot up in.

Council chiefs reckon it could help curb deaths in the area.

They have published a draft strategy which lays out several potential solutions to drugs problems.

The city has an estimated 5,000 users of opiates and crack cocaine, a rate which is roughly double the national average.

One proposed fix is “drug consumption rooms”, where addicts can safely inject – which are currently illegal in the UK.

Officials say spaces would be installed with the “aim of limiting risky injecting practices and deaths from overdose”.

Some experts believe it could benefit everyone by taking drug users off the street and into safe spaces.

But the idea sparked controversy after being proposed in other cities like Brighton, where it was shut down.

Despite this, one former heroin addict defied the law to set up a mobile “fix room” in Glasgow earlier this year.

Peter Krykant converted a minibus into a facility where he claimed addicts could take drugs safely under supervision.

Other proposed solutions in Bristol include strengthening support services, tackling inequalities and stigma and increasing education.

A draft police document states: “Bristol has committed to giving due consideration to additional harm reduction measures, such as safe injecting rooms.

“These installations, not currently legal in the UK, are used in a number of countries with the aim of limiting risky injecting practices and deaths from overdose.”

The document says action will only be taken “within the current legal framework”, of which “drug consumption rooms” currently sit outside.

The new strategy outline comes after police expressed concern over the rising number of drug-related deaths in the city.

Deputy mayor Asher Craig said: “We want Bristol to be a place where everyone can live safe from the harms caused by drug and alcohol misuse.

“The effects of addiction don’t just ruin the lives of the people who need support, but also their families, loved ones, wider communities, services and businesses.

“This draft strategy describes how we can tackle drug and alcohol misuse in Bristol, offering the right support at the right time for those who need it.

“It also looks at preventing addiction, how we can support healthy behaviours, and how we can reduce drug and alcohol related crime.”

He said many causes of addictions are being “exasperated” by the pressure of the Covid-19 pandemic.

Residents have until January to give their feedback on the proposed strategy, which covers 2020-20124.

Maintaining Your Health after Marriage

Beauty and health should go in hand

COVID vaccines: Is it important to get the right one?