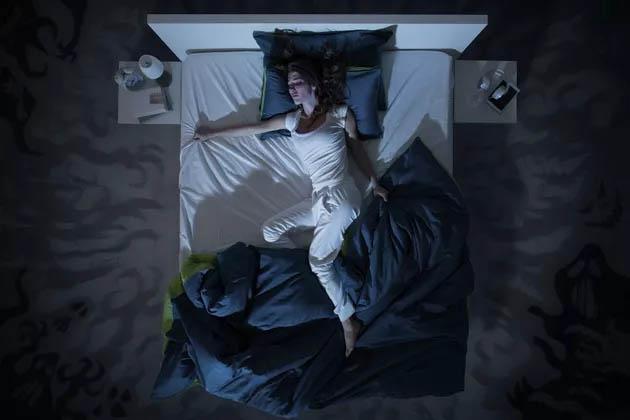 There are certain times you expect to sweat — in the middle of a heat wave, during your spin class and maybe even before a gigantic work presentation. But if you’ve ever woken up in the middle of the night drenched, you may wonder what’s happening.

“Sweating itself is completely normal — it’s a way for your body to regulate its temperature,” says Donald Ford, MD, a family medicine specialist at the Cleveland Clinic.

If you wake up sweaty in the middle of the night underneath a heavy blanket or in a too-hot bedroom, it’s one thing. That’s due to overheating, and when you remove the culprit, your body temp — and your nocturnal awakenings — should return to normal.

But if you wake up in soaking sheets and your thermostat is set to a cool 65 degrees, there may be other, underlying health issues causing your night sweats, Dr. Ford says.

They’re actually surprisingly common — up to 41 percent of people in a primary care setting reported having them in the last month, per a November-December 2012 review in the ​Journal of the American Board of Family Medicine​. They were most common in people ages 41 to 55.

Here, five common reasons you might get night sweats, and what to do about them.

The years leading up to menopause — known as perimenopause — are prime time for hot flashes: Almost 80 percent of women report experiencing them as they go through this stage of life.

This is due to significant fluctuations in your body’s production of the sex hormones estrogen and progesterone, says Stephanie Faubion, MD, medical director of the North American Menopause Society and director of the Mayo Clinic’s Center for Women’s Health. These fluctuations occur multiple times a day, including at night, when they cause night sweats.

​Fix it:​ If your hot flashes are mild, you can try lifestyle changes such as keeping your thermostat at a low temperature, using lighter bedding and sleeping in lightweight, loose-fitting clothing, Dr. Faubion says.

You should also avoid caffeine and alcohol, especially in the evening, as they can cause spikes in body temperature and trigger sweating.

But if these changes don’t help, or your symptoms are more severe, talk to your doctor about your options.

If you’re within the first 10 years of menopause and you don’t have risk factors such as heart disease, diabetes, high cholesterol, high blood pressure or a history of breast cancer, then you can try a course of hormone therapy, Dr. Faubion notes. You can also ask about Brisdelle, an anti-depressant that’s also FDA approved to treat hot flashes.

2. It’s a Side Effect of Your Meds

Certain medications are known to be associated with night sweats: “They alter neurotransmitters in your brain, causing it to overproduce the hormone serotonin, which in turn throws your body temperature out of whack,” Dr. Ford explains.

The biggest offenders are a class of anti-depressants known as selective serotonin reuptake inhibitors (SSRIs), certain blood pressure and diabetes medications and over-the-counter drugs like the heartburn drug omeprazole (Prilosec) or the pain-reliever naproxen (Aleve).

​Fix it:​ Talk to your doctor. You may be able to switch to another type of medication that won’t cause the same reaction, Dr. Ford says. You should also avoid caffeine and alcohol, since they can exacerbate the problem.

3. You’ve Got a Hormone Issue

Hyperthyroidism (where your body produces too much thyroid hormone) can overstimulate your nervous system, which means you not only have trouble falling and staying asleep, but you can wake up in the middle of the night sweating up a storm, says Peter Bidey, DO, an osteopathic family physician and assistant professor in the Department of Family Medicine at the Philadelphia College of Osteopathic Medicine.

If you have undiagnosed diabetes, that can also wreak havoc with your blood sugar levels and cause you to sweat more easily, including at night.

While there are other conditions caused by adrenal tumors — such as pheochromocytoma and carcinoid syndrome — that can cause night sweats, these diseases are relatively rare, Dr. Bidey says.

​Fix it:​ See your doctor, especially if you have other symptoms of hyperthyroidism such as heart palpitations, mood swings, hyperactivity and weight loss, or of type 2 diabetes, such as increased thirst, hunger and urination. Your physician can run blood tests to diagnose either condition, Dr. Bidey says.

4. It’s a Side Effect of Sleep Apnea

Night sweats occur about three times as often in people with untreated sleep apnea — a condition where your throat tissue blocks your airway, causing you to stop breathing multiple times throughout the night — according to an April 2013 study in ​BMJ Open​.

This is because each episode of apnea causes your body to release the stress hormone cortisol, which activates your nervous system, Dr. Bidey says.

​Fix it:​ Watch for other symptoms of sleep apnea, including snoring, morning headache and feeling super fatigued during the day (to the point where if you sit down, you sometimes nod off). If you have them, see your doctor, who can refer you to a sleep specialist.

Sleep apnea is diagnosed via an overnight sleep study, where you’re hooked up to equipment that monitors your breathing patterns and blood oxygen levels while you sleep.

If you do have sleep apnea, you’ll need a CPAP, a machine that delivers air pressure through a mask while you sleep.

5. You Have an Infection

Life-threatening infections such as tuberculosis, human immunodeficiency virus (HIV), endocarditis (a heart valve infection) and osteomyelitis (a bone infection) are associated with night sweats, most likely because they can trigger a fever, Dr. Ford says.

​Fix it:​ These diseases usually present with other symptoms, such as chills, fever, body aches, fatigue and loss of appetite, Dr. Ford says. If you notice any of these, see your doctor right away.

When to See a Doctor for Night Sweats

If you get night sweats once or twice, there’s no need to be concerned, Dr. Bidey reassures, especially if they’re relieved by opening a window or applying ice packs or cold compresses to your body.

But if they occur more often than that, or you’ve got other symptoms like fatigue, high fever, weight loss or body aches, see your doctor. He or she can rule out underlying medical conditions such as an infection, a hormonal condition, or, more rarely, a blood cancer such as leukemia or lymphoma.