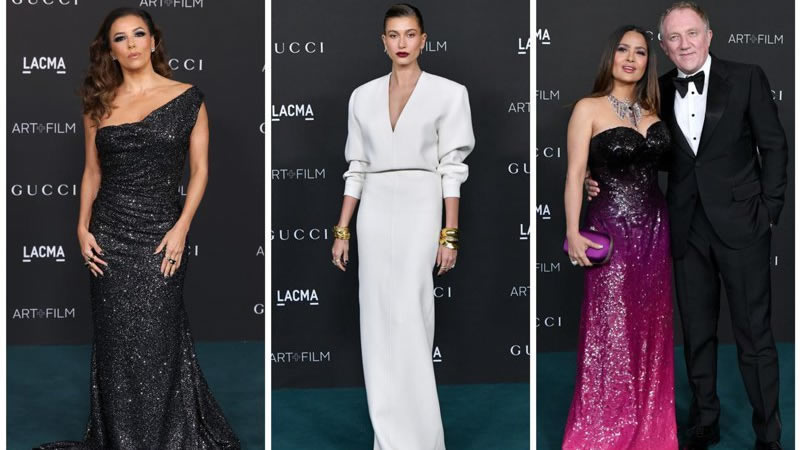 The star-studded annual affair is often affectionately referred to as the Met Gala of the West as it features well-heeled, A-list guests from fashion, film, music, philanthropy, business and tech gathered to raise funds for a museum. But this year’s LACMA Art+Film Gala, a milestone 10th-anniversary event, shimmered in its own, brighter light on Saturday night.

It was one of the few black-tie affairs hosting hundreds of guests amid the ongoing COVID-19 pandemic — following September events like the Emmy Awards and the opening of the Academy Museum of Motion Pictures — and the energy was ebullient on the museum grounds.

Many were stepping out together for the first time in nearly two years, doing so on a night that celebrated a legendary filmmaker in Steven Spielberg and two prominent artists in Kehinde Wiley and Amy Sherald, a pairing in line with one of the themes of the evening of shining a spotlight on the importance of representation for Black artists and Black subjects in art.

Del Toro praised Spielberg as a genius in the same league as Walt Disney and Alfred Hitchcock for how he has created “mountains” and “fixed points in the landscape of our narrative.”

He also called him a “beautiful human being” who can be texted in the “horrible hours of the morning or night” to address any sort of question about movies and he always responds. Del Toro recalled that during one of the most difficult moments of his life, he watched Close Encounters of the Third Kind and was transported to a better place.

“I fell on the grass and looked at the stars and I knew that there was a longing in me that I could not name but there was also a hope that the world could be bigger, wider, than anything I was experiencing,” recalled del Toro.

Spielberg then took to the stage to explain that he was initially sheepish about getting an award from an art museum because he has never publicly called himself an artist.

“I want to admit a slight uneasiness when I learned that I was going to be honored by an art museum on the same evening as two extraordinary artists because I never know what to feel when people refer to me as an artist or call what I make art. Because I don’t think I’ve referred to myself in public that way.”

Continued Spielberg: “I really consider myself a guy who likes to tell stories and directing is my vocation and it’s my skillset and the filmmakers in my personal pantheon whose films provided me with the antecedents for my own work were studio directors.

These were highly skilled team players who became masters of the medium like John Ford, William Wyler, Alfred Hitchcock, Michael Curtiz and so many more who all felt more comfortable defining themselves as craftsmen and describing their achievements as popular entertainment.”

He was relieved then to recall that the event is called the Art+Film Gala, as he explained: “Kehinde and Amy are here to represent art. I’m here to represent film.” What ties them together is that both artists and filmmakers confront and seek encounters with the unknown in their work.

“Maybe it’s hard to admit to being an artist because it entails an obligation to go into the unknown in pursuit not of perfection but of revelation,” said Spielberg. He also proudly talked about his wife Kate Capshaw’s work as a portraitist, calling her “my soul’s companion” and noting that, “In recent years, I’ve had a whole new reason to love portraiture because…I’m in love with a portrait painter.”

He also referred to himself and del Toro as “brothers in love with cinema,” sharing with the crowd that, “during the lockdown, he [del Toro] encouraged me, I encouraged him.

We found movies we had never seen before and we let each other know what they were. So the lockdown was literally spent watching movies, getting on text, and talking for hours about the films we saw. He knows more about films than Marty Scorsese.”

Art+Film, sponsored once again by Gucci with support from automaker Audi, typically sees one honoree from each discipline but the expansion of the program to three honorees came as the Wiley and Sherald had their official portraits, respectively, of Barack and Michelle Obama, which are part of the collection of the National Portrait Gallery, debuted for guests in the Resnick Pavilion.

Actress Tracee Ellis Ross offered a tribute to Sherald, saying, “She paints of me, she paints of us, she paints of Black people. How we are, who we are, as we are, without the many pretenses, masks, and code switches that we have to make in order to be safe in the world. … She paints us larger than life in all of our glory and all of our ordinariness.”

Sherald — whose portrait of Breonna Taylor appeared on the cover of Vanity Fair last year — dedicated her award to the art teacher, Geri Davis, who she had from kindergarten through 12th grade growing up in Columbus, Georgia.

“She spoke to me,” recalled Sherald of the impact Davis had on her, “about finding subjects that looked like me to draw. She said she thought it was very important for me to represent my own story in my work. She recognized my struggle of being the only Black child in her classroom.

That day, she planted a seed that has carried me through my life and emboldened and inspired me to make mirrors in which others can find reflections of dignity and grace.” Sherald, trying to hold back tears, said that Davis had passed away just a few days earlier from pancreatic cancer.

Director Ava DuVernay gave an introduction to Wiley, describing his aesthetic approach as “portraying contemporary subjects in a style of those Old Masters, using what was once reserved for a few to fashion a new way of seeing Black and brown people in our multi-faceted experiences.”

Wiley, who thanked his mother, who was in the audience, for encouraging him as a child in his artistic interests, said, “Art is at the service of things that are bigger than us.” (Wiley has curated a new show of self-portraits by African artists that just opened at Deitch Gallery in Los Angeles.)

Chaired by Leonardo DiCaprio and LACMA board member Eva Chow, the night, which raised a record $5 million for the museum, kicked off with an outdoor cocktail reception on the museum grounds.

DJ D-Nice — a superstar deejay who saw his star rise during the pandemic with his IG Live series Club Quarantine, streamed by everyone from Michelle Obama to Rihanna — delivered the beats while stars from Squid Game, including director Hwang Dong-hyuk, stars Lee Jung-jae, Park Hae-soo and Lee Byung-hun, posed for photos and accepted congratulations from admirers of Netflix’s biggest series to date.

Meanwhile, a crush of stars waited at the entrance to the red carpet where it looked to be a date night for many bold-faced name attendees. Billionaire Jeff Bezos made a rare red carpet appearance with girlfriend Lauren Sanchez on his arm; Phoebe Bridgers and Paul Mescal made their red carpet debut; Billie Eilish posed for photographers while her boyfriend Matthew Tyler Vorce looked on; Disney chief Bob Iger stepped out with wife Willow Bay, who serves on LACMA’s board of trustees; Netflix’s Ted Sarandos arrived early with wife Nicole Avant, who also sits on LACMA’s board; Salma Hayek posed with husband Francois Henri-Pinault, the chairman and CEO of Kering (which owns Gucci); Serena Williams arrived with husband Alexis Ohanian, and Liberty Ross shimmered opposite Jimmy Iovine. Other couples included James Corden with wife and Julia; Steven Yeun and Joana Pak; House of Gucci filmmaker Ridley Scott with Giannina Facio Scott; The Power of the Dog stars Kirsten Dunst and Jesse Plemons, who said hello to their co-star Benedict Cumberbatch and his wife Sophie Hunter. At one point Corden was overheard telling Bezos, “I know a house you should buy.”

Proceeds from Saturday night’s Art+Film are funneled to LACMA’s initiative to centralize film in the museum’s programming among other programs.

Seasonal Transition: What to Wear In The Awkward Phase Between Summer and Fall