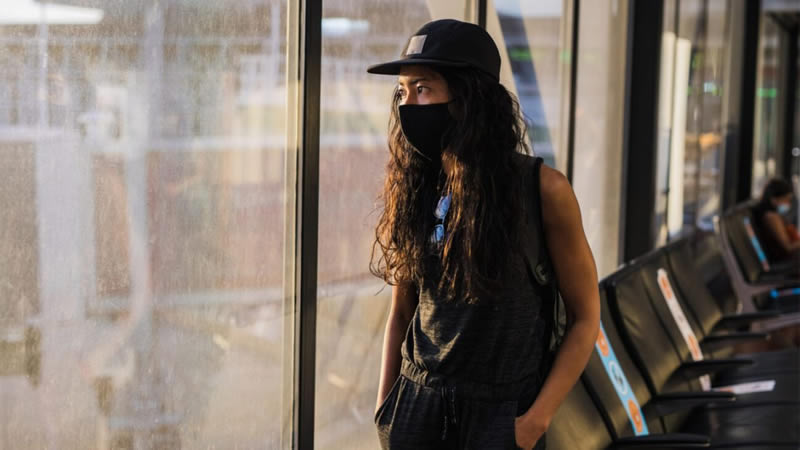 The consequences of disrupting a flight over a face mask can range from getting kicked off the plane to criminal charges.

Face masks — worn properly — have been required on all flights in the United States since the beginning of the year.

Travelers who fail to follow this COVID-19 rule risk getting kicked off the flight, banned from an airline, or charged criminally, depending on how much of a disruption they cause.

But they could also end up going viral on social media as “that person” who refuses to follow a regulation designed to keep all passengers safe.

When are face masks required while traveling?

Laura Motta, senior director of content for Lonely Planet, said in-flight safety rules have been around since the beginning of commercial aviation.

You have to wear a seat belt during takeoff and landing. You cannot smoke a cigarette or vape in the airplane’s bathroom. You have to turn off electronic devices when asked by the flight crew.

So passengers being asked to do something like wear a face mask while onboard an airplane is not entirely new.

“Your safety and security is the job of the flight attendants and the pilots,” Motta said. “So they are allowed to ask you to do things that will protect not just you, but also the other people on the plane with you.”

The COVID-19 pandemic added another safety risk for airlines to manage — the potential spread of the coronavirus among passengers and crew who are in close contact for long periods.

That’s why in January 2021, the Centers for Disease Control and Prevention (CDC) issued an older trusted Source requiring people to wear a face mask while on public transportation.

This covers not just planes, but also trains, buses, taxis, and ferries. And also airports, bus or ferry terminals, and train or subway stations.

Children under 2 years old and people with a disability who cannot safely wear a mask are exempt.

People are also allowed to remove their mask for short periods, such as while eating, drinking, or taking medications.

At all other times on public transportation, the face mask should cover a person’s mouth and nose.

What happens if you don’t wear a mask on a plane?
Unless exempt from the mask order, people who refuse to wear a mask will not be allowed to board the plane.

Once onboard, passengers have to wear a mask for the duration of the flight, except for approved reasons such as eating or taking medication.

Some people, though, may push the boundaries of these exceptions or refuse to wear a mask entirely.

Motta said travelers ignoring these kinds of safety rules goes back well before the pandemic.

“There is a long and sordid history of people misbehaving on airplanes,” she said. “[The face mask rule] is just the newest catalyst.”

According to the CDC Trusted Source, if a person refuses to wear a face mask while on public transportation, “the operator must disembark the person at the earliest safe opportunity.”

On a plane, that would be at the next airport. But if the plane is still on the tarmac, the pilot could bring it back to the terminal.

What happens next depends on how disruptive a passenger gets.

“They may just send you off the flight, and your transportation then becomes your own problem,” said Motta. “[But] some airlines will ban you for life for refusing to comply with these guidelines.”

If a person gets violent or confrontational, they may also face criminal charges.

Refusing to wear a face mask on a plane is not itself a federal violation, according to the U.S. Department of Transportation.

Federal law allows for people to be fined or face imprisonment for these disruptive behaviors.

Travel tips from the experts at Lonely Planet
Refusing to follow safety guidelines such as wearing a face mask on an airplane can result in your removal from an aircraft.
Some airlines will ban you from future flights for refusing to follow safety guidelines.
If a person gets violent or confrontational, they may also face criminal charges.
Federal law allows for people to be fined or face imprisonment for these disruptive behaviors.

What happens when your misbehavior goes viral?

People refusing to wear a mask on a plane should expect their actions to be captured on video by at least one other passenger.

“This is an era where, as soon as anything like this happens on a flight, someone’s going to pull out their phone,” said Motta.

These kinds of videos — especially when a passenger is confrontational — can go viral very quickly.

If a person is lucky, said Motta, they might just be embarrassed by their actions being posted online.

But a viral video could cause even larger problems for them.

“If you work for a private employer, they may look at your behavior and say, ‘I don’t think that’s someone we want to have at our company,’” Motta said.

Being the unwitting star of a viral video can also result in online or in-person harassment.

“[This] can bleed into your real life in other ways,” said Motta. “People can figure out where you live. People can say all kinds of mean things to you. There are definitely repercussions to this.”

What should you do if there’s a confrontation?

Although disruptive passengers tend to be the exception rather than the rule, confrontations on a plane can happen — even over face masks.

When another passenger starts arguing with the flight crew, Motta said that often, the best thing you can do is to stay out of it.

“If your involvement in this situation is, in any way, going to make things worse — and it probably will — the best option is to not get involved and to follow the safety regulations yourself,” she said.

Sometimes, though, you’re the one who has asked another passenger to put on their mask.

“If they have a negative reaction [to that] or they start trying to confront you, that’s the moment where you want to call for help,” said Motta.

Travel tips from the experts at Lonely Planet

How long will face masks be required?

Julianne Piper, a research fellow and project coordinator for the Pandemics and Borders project at Simon Fraser University, said public health measures such as vaccination requirements, pre-flight testing, and face masks will continue to be important going forward, especially for international travel.

“It’s easy to want to get back to normal with traveling globally, but we need to be cautious because vaccination rates are so unequal around the world,” Piper said.

As of September 9, nearly two-thirds of people in high-income countries had received at least one dose of a COVID-19 vaccine, according to the Kaiser Family Foundation.

“As long as we have areas where there are high levels of transmission, there’s a potential for new variants to emerge that are vaccine-evasive,” said Piper.

So going forward, we will need to have more flexibility while we travel, and a little more compassion for other travelers said Motta.

“This is not a seamless way to travel,” she said. “But if you want to travel, [COVID-19 rules are] something that we all need to manage and deal with.”

Kim Kardashian ‘not surprised’ Kanye wants her back, but there’s no chance of reconciliation

Lacma Gaga 2021: Check Out Of The Elegant Guests Of The Evening

Honeymoon Travel: Where to Go and When