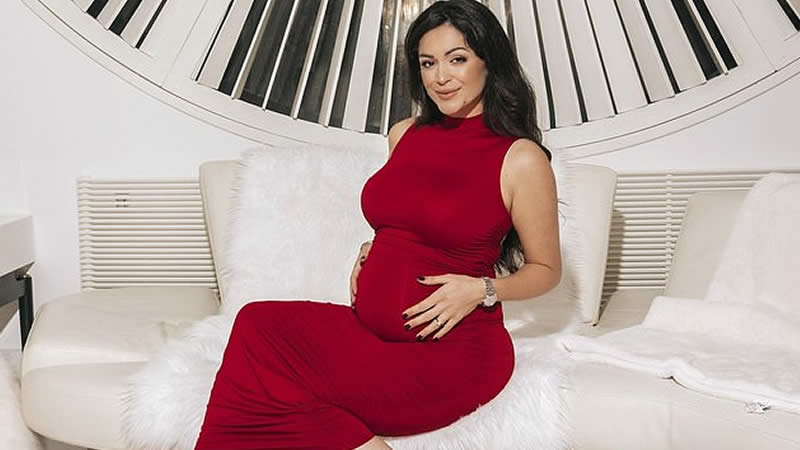 Casey Batchelor is counting down the days until she welcomes her third child.

And the TV personality shared a look at her ever-growing bump on Tuesday as she soaked up the sunshine in her back garden.

The 36-year-old star looked the picture of radiance as donned a figure-hugging peach dress which did wonders to compliment her bump – which her fans dubbed ‘huge’.

Alongside the stunning snap of the expectant mum, Casey admitted that she’s looking forward to finally meeting her little one, who is just days away from arriving into the world.

Casey, who let her natural beauty shine through in the makeup-free shot, penned: “Me and Bump catching some rays.”

“Waiting for little lady to make her appearance,” she added.

The TV star turned yoga instructor, who already shares two daughters, Florence and Sadie, with her businessman boyfriend Dane Goodson, was inundated with compliments from adoring fans who were ‘mesmerized’ by her ‘huge’ bump.

Flocking to the comments, one swooning fan wrote: “Casey you look angelic in these photos. I’m mesmerized by your bump – it’s huge.”

“OMG! She looks so amazing. And as if she’s ready to pop any minute now,” another echoed.

“That bump must be seriously hard to carry. The sheer size of it. What a beautiful woman and bump,” a third gushed.

Casey, who announced her pregnancy back in February, previously revealed her desire to be a mum of three under the age of three.

Opening up about her family plans at the time, the star told Hello! Magazine: “We get pregnant so easily.

“Florence is three at the end of May and then just a couple of weeks later there will be a newborn, so it will basically be three under three. I know, it’s crazy.

“We were just so happy and excited to have another one on the way. We feel very fortunate we get pregnant so quickly and easily. We’re obviously very compatible.”

Throughout her pregnancy, the yoga guru has updated her 331k Instagram followers with bump pictures and her experiences.

Although she endured a tough time during her first two pregnancies, Casey had quite an easy journey throughout her third time – leading her to believe she was expecting a baby boy.

She previously told Closer magazine: “I’ve had no sickness, no tiredness – I often forget I’m pregnant.

“We had only discussed boys’ names and I’d planned a nursery; I was that sure.”