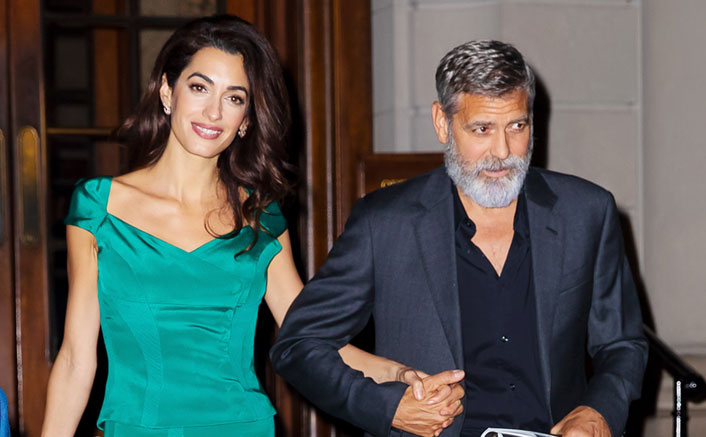 George Clooney and Amal Clooney is one of the power couples of Hollywood. The couple had reportedly met at a charity fundraiser in September 2013. In less than a year, the two became talks of the town. Clooney, who had previously dated celebs like Kelly Preston and Stacy Keibler, claims to have hit off immediately and a few weeks later the romance truly blossomed.

The Oscar-winning actor also during his appearance at My Next Guest Needs No Introduction with David Letterman, said “I got a call from my agent who said, ‘I met this woman who is coming to your house, who you’re going to marry.’” He then claimed that he is glad that it worked that way.

George Clooney and Amal Clooney are now proud parents of three-year-old twins Alexander and Ella. Since the pandemic struck, they have been spending time at his home in Hollywood Hills in Los Angeles instead of heading to their homes in England or Italy.

Talking about his time spending at his home for nearly ten months, Clooney said to Daily Mirror, “We really haven’t moved since February. It’s easier in Los Angeles because it’s not raining and snowing, so it’s a lot easier to walk out in the street. These drug companies have done an amazing job and we’re almost there so it would be really stupid to blow it now. So we’re staying here and we’ll do Christmas here.

There’s nothing more fun than sitting there in the morning with my kids singing in Italian and us making breakfast for them. I picked right when I picked Amal. It’s just the two of us having dinner together every night and we never run out of the conversation. We couldn’t be happier with our lives and we couldn’t feel luckier.”

George Clooney also spoke about what he did during the pandemic at his home. He said, “I did my own laundry and washed dishes and mopped, and I painted the entire interior and exterior of my house. And now it’s just the four of us here and so I’m back to doing all of that. I cooked Thanksgiving dinner for the four of us, I wood-stained all the wood furniture outside and the walls. And I did all the things that I haven’t done in a bit, which was a good reminder that I can still do them all. It’s fun.”

Meanwhile, George Clooney appeared on Tuesday’s episode of Daily Pop, host Morgan Stewart and teased fans by suggesting reality cameras document his life with wife Amal Clooney and their three-year-old twins. The 59-year-old actor’s statement thrilled the host and a lot of fans as well.

The two-time Oscar winner jokingly said, “So, I’ve got a new idea. It’s E!, so I think this will fit perfectly. Just pitching it right now: Keeping Up With the Clooneys.” To which Morgan Stewart quickly responded, “Listen, we will take it any second. Any time you want to give us that, done.”

How to Treat Sunburns?