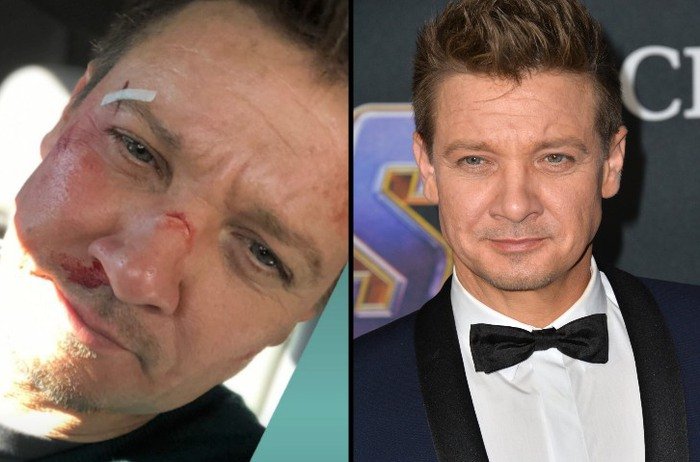 Is Jeremy Renner OK? The 49-year-old actor posted a selfie to his Instagram Stories that shows him a little worse for wear. Looking like he’s in his car, Renner has numerous cuts and scrapes on his face, including dried blood smeared under his left nostril.

On the photo he captions, “Monday’s….”. While we certainly understand having a bad case of the Mondays, this definitely appears to be the 2020 version of the mantra. So what happened?

The following two posts on his Stories don’t offer much help. Six hours later Renner reposted a short video from DiscoverOcean of a humpback whale breaching the water with an epic flip. Just a mere hour later he posted an image of him doing a dumbbell tricep curl with the caption, “Just do it! And get it over with already.”

Unfortunately, Renner has his back to the camera, obviously to show off those guns he’s working, but the shot obscures his face to see if the cuts are still present. If posted in chronological order, getting a good sweat in is a good sign as is well.

In the clip, Renner showcases a few tools to help work knots out of sore muscles that he seems less than excited about having to use again. But these posts have spurred a lot of chatter that the new TV series Hawkeye, in which Renner reprises his iconic Marvel role, is back in production.

Eagle-eyed fans were quick to point out how his hair is styled, along with the “strategically placed” cuts, that would seem to suggest that production for the show is back on, especially in light of the other social posts we highlighted above.

Due to Covid-19, production for Disney+’s Hawkeye had been put on hold, but as studios have been crafting and implementing safety protocols, more and more movies and shows have returned to filming. While there is yet to be official confirmation on this, all the known hints at this time appear to be pointing to this conclusion.

We’ll be sure to keep on eye on news reports as well and Renner’s social accounts, but for now, we can safely assume the actor is doing just fine.

Meghan Markle essay ‘penned by one of her obedient aides’: Haters target Duchess of Sussex