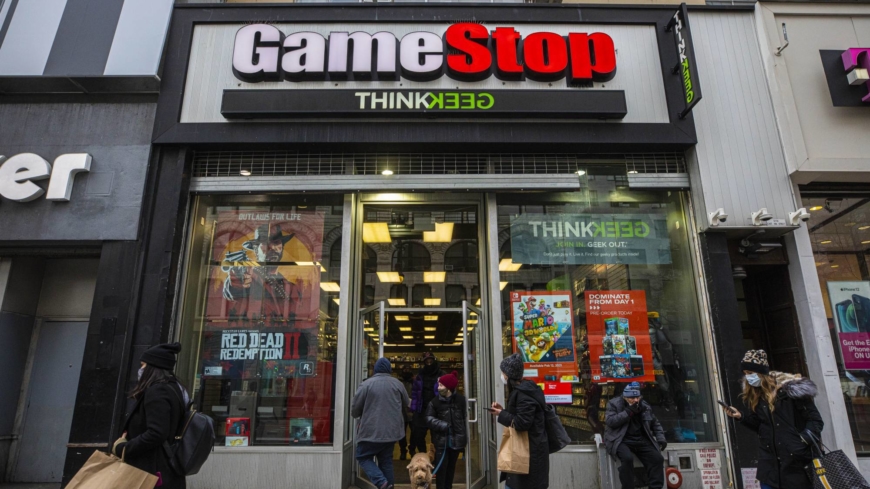 A real estate salesman in Valparaiso, Indiana. A former line cook from the Bronx. An evangelical pastor and his wife in Huntington Beach, California. A high school student in the Milwaukee suburbs.

They are among the millions of amateur traders collectively taking on some of Wall Street’s most sophisticated investors — and, for the moment at least, winning. Propelled by a mix of greed and boredom, gleefully determined to teach Wall Street a lesson, and turbocharged by an endless flow of get-rich-quick hype and ideas delivered via social media, these investors have piled into trades around several companies, pushing their stock prices to stratospheric levels.

Some of the names are from an earlier business era. BlackBerry’s shares are up nearly 280% this year. Stock in AMC, the movie theater chain, has surged nearly 840%. But the trade that captures the David-versus-Goliath nature of the moment involves GameStop, the troubled video game retailer that was once a fixture in suburban malls.

On Wall Street, individual investors are often derided as “dumb money,” destined to lose against the highly compensated analysts and traders who buy and sell stocks for a living. But in recent days, individual investors — many of them followers of a popular, juvenile, foul-mouthed Reddit page called WallStreetBets — have upturned that narrative by banding together to put the squeeze on at least two hedge funds that had bet that GameStop’s shares would fall.

While the hedge funds and other professional money managers had been shorting GameStop’s shares, betting that its stock was doomed to further decline, the retail investors — online traders, mom-and-pop investors, small brokers and others — have been pushing the other way, buying shares and stock options. That caused GameStop’s market value to increase to more than $24 billion from $2 billion in a matter of days. Its shares have risen more than 1,700% since December. Between Tuesday and Wednesday, the market value rose more than $10 billion.

The tribal framing online, as a kind of team sport pitting plucky upstarts against well-heeled Wall Streeters, has been especially helpful in motivating more investors to participate. This week, Tesla’s chief executive, Elon Musk, fueled the trading by posting about the Reddit page on Twitter. And speculation is growing that other investors are seeing fresh opportunities to push the stock even higher.

Ben Patte, 16, a high school student in Wisconsin who said he made $750 off GameStop stock, said the campaign felt like vindication for himself and fellow young traders. “It’s a good opportunity to make money and stick it to the hedge funds,” he said. “By buying GameStop, it’s kind of like beating them at their own game.”

No one knows how this ends. Some analysts say the intense activity could eventually prompt a wider sell-off in the market by forcing hedge funds on the losing side of these trades to sell parts of their portfolios to raise cash to cover their losses. While this speculative frenzy played out on the market’s sidelines, the S&P 500 fell more than 2.5% on Wednesday, its worst day since late October, as the Federal Reserve gave a glum assessment of the economy and before a number of big tech companies announced their earnings.

“What happens in situations of stress is that people are forced to raise funds and that often means selling your winners,” said Steve Sosnick, chief strategist at Interactive Brokers in Greenwich, Connecticut. “How does it end? Badly. Eventually, the bigger the balloon, the louder the pop,” said Sosnick. “When does it end? I don’t know.”

On Wednesday, the retail brokerage firm TD Ameritrade put restrictions on the trading of GameStop, AMC and other stocks, citing “unprecedented market conditions.” And market regulators could step in.

Also on Wednesday, WallStreetBets, the Reddit forum fueling the frenzy of trading, turned itself off to new users after a deluge of new participants raised concerns about its ability to moderate content, a notice on the website said.

But for now, the siege is on.

Beginning last summer, GameStop shares started to rise after an investment firm owned by Ryan Cohen — founder of Chewy, the online pet supplies shop, whose stock was popular with retail investors — bought a stake in the company and joined its board. Around the same time, some hedge funds were betting that GameStop’s stock would plummet. The company had been reeling from consumers’ shifts to online commerce and streaming, but the pandemic was bruising it further.

Short-selling works this way: An investor, who expects a stock price to fall, borrows shares of that company from another investor for a fee and sells it immediately, hoping that when the price does fall, they can buy the shares back cheaply, return them to the owner and pocket the difference.

It’s a risky trade. If the stock rises, the short seller is exposed to losses that are theoretically infinite. (After all, share prices can keep rising, while they can only fall to zero.) For that reason, when a bet goes wrong, short sellers rush to repurchase the shares they borrowed so that they can return them and exit their trades — a process known as covering.

That’s what is happening with GameStop. As retail investors began to buy up its shares and options — many of them egged on by r/WallStreetBets and other forums — its stock began to surge, forcing the short-selling hedge funds to buy back the borrowed shares at a higher price, which itself pushed the stock price higher. In Wall Street parlance, this is a “short squeeze” — a strategy sometimes employed by sophisticated investors against one another.

Over the past three trading sessions, GameStop shares have careened wildly. On Wednesday, when the shares rose almost 135%, $24 billion worth of the company’s shares changed hands, the most actively traded stock on Wall Street.

Analysts say GameStop shares have become unmoored from underlying expectations for profit that typically determine the value of a stock.

“Trading like we’re seeing in GameStop is humbling for those of us who hold onto the quaint idea that capital markets channel investors’ money to its most efficient and productive uses,” said Tyler Gellasch, a former Securities and Exchange Commission official who now leads the Healthy Markets Association, a nonprofit that promotes transparency in financial markets.

Pablo Batista is among those driving the frenzy. Since the pandemic shuttered the restaurant in Midtown Manhattan where he worked as a line cook, he has been trading stocks from his family home in the Bronx. At first, Batista, 25, traded to pass time during the lockdown, but has since become more serious as his $4,000 investment in stocks has swelled to more than $67,000. He spends most days on the messaging site Discord, trading stocks along with former friends from high school.

“At this point, I’m like overwhelmed,” he said of the $11,440 he made trading shares of GameStop on Monday. “It’s ridiculous. It’s crazy.”

Almost since the internet was created, investors, traders and speculators have gathered online to swap rumors, tout their holdings and trash stocks they’re shorting. In the 1990s, such message boards were hotbeds of bullish talk on the popular tech stocks that dominated the dot-com boom.

The current mania is reminiscent of the 1990s, except that it’s more viral and driven by options trading. Since the pandemic hit, millions of Americans — many who are out of a job or working from home — have opened brokerage accounts and begun trading actively, helping to fuel a market rally.

Retail traders aren’t just buying and selling stocks; they are also buying options, a kind of financial instrument that gives the holder the right to buy or sell a stock. Brokerage firms have marketed options heavily to retail investors because they are more profitable.

And then there is WallStreetBets, a wildly popular Reddit forum focused on options trading that has become a sort of public hive mind where retail investors loosely coordinate their collective buying power on targets that are most likely to amplify price pops. In recent weeks, posts began to appear on the forum spotlighting the large amount of GameStop shares held short, and explicitly urging others to buy shares and options to move the price higher.

“Rally the troops, my brothers, for the war could be over very soon,” a commenter who goes by Gardeeon wrote on Jan. 19.

Such outright calls on social media for investors to coordinate their behavior struck many observers as skirting the line of market manipulation. On Wednesday, the SEC said in a statement it was “actively monitoring the ongoing market volatility.”

WallStreetBets turned itself off to new users after a deluge of new participants raised concerns about its ability to moderate content, a notice on the website said Wednesday. Shortly after 6:30 p.m. in New York, the Wall Street Bets home page indicated that moderators have made the chat private, requiring an invitation to enter. Adding to the drama, Wall Street Bets was banned by the communications platform Discord for not doing enough to stem hateful speech. The move wasn’t tied to Wall Street Bets’ efforts to promote stocks such as GameStop, a representative for Discord said Wednesday.

Lawyers say platforms like WallStreetBets are incredibly difficult to police, and it is not clear that there have been any violations of securities law.

“If it’s simply garnering enthusiasm for people to go out and push the price up, I mean on its face, without something more, I don’t think that’s illegal,” said Andrew Calamari, a securities lawyer at Finn, Dixon & Herling, and the former director of the New York office of the SEC.

It is, however, effective.

Melvin Capital, a well-respected hedge fund run by Gabe Plotkin, a former top trader for the hedge fund giant Steven A. Cohen, drew the ire of Wall Street Bets after disclosing in filings that it owned puts on GameStop. (Puts are options that produce a profit if the shares of the stock fall.)

The fund’s bets backfired — The Wall Street Journal reported that it was down 30% in the first few weeks of January alone — and Melvin said Monday that two bigger funds, Citadel and Cohen’s Point 72, had swooped in to inject a combined $2.75 billion into the fund. A spokesperson for Melvin said the fund had closed out its position on GameStop.

Citron Capital, a short seller that had made public statements suggesting that GameStop shares would fall, was also bruised. On Wednesday, Andrew Left, who runs the firm, acknowledged in an online video that he had covered the majority of his short position “at a loss, 100%.”

Justin Speak, 27, an evangelical pastor in California, and his wife, who recently left her job to raise their children, have made $1,700 off GameStop in the past week. Speak said that so far they had mainly put the money toward a new bed. He described a sense of frustration at how well those in the financial sector have done since the financial crisis of 2008.

“There’s a catharsis to actually making money off their pain a little bit,” he said of his modest earnings from GameStop. His wife put it more bluntly: “Eat the rich.”

Read the original article on seattletimes

Wikipad Gaming Tablet Launches Next Week In US