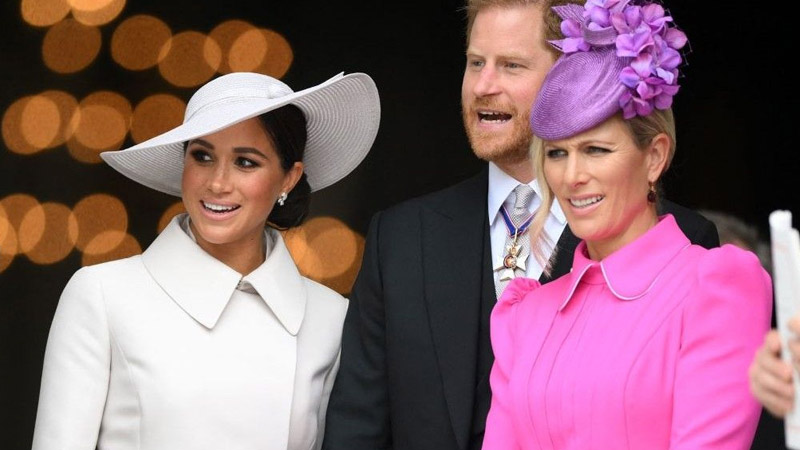 Zara Tindall made a ‘brutal remark’ to Prince Harry at their cousin Princess Eugenie’s wedding, according to reports. Eugenie and Jack Brooksbank married in October 2018, having gotten engaged five years ago.

Their wedding at St George’s Chapel at Windsor Castle came just a few months after Harry and Meghan Markle’s nuptials at the same venue. Both were star-studded occasions, with celebrities turning out alongside members of the royal family.

However, for Zara, there was reportedly a significant difference between the two weddings.

Tabloid reports have suggested several times over the years that Zara, 41, and Harry, 38, are close. Footage has previously been shared from his Christening showing a young Zara cooing over her younger cousin.

She is also said to have been someone to offer her “supportive presence” to Harry and his brother Prince William. However, going by previous claims from a lip reader, Princess Anne’s daughter has also teased Harry.

During Eugenie’s wedding, Harry and his wife sat on pews behind Zara and her husband Mike Tindall.

Coverage of the service showed Zara shifting around in her seat, with Harry leaning over in her direction as she spoke.

And according to the Mirror, Zara made a “brutal” comment when comparing the wedding they were attending to Harry’s own.

According to a lip reader at the time,  Zara said: “It’s very quiet compared to the screaming at your wedding.”

It’s very quiet compared to the screaming at your wedding.

The year after attending Harry and Meghan’s wedding, Zara reportedly admitted she was “uncomfortable” during the ceremony.

She told the Daily Telegraph in 2019: “I was uncomfortable! My bum sort of slid over either side [of the seat] and [daughter] Lena kicked the hell out of me for an hour.

“It just wasn’t comfy at all and it probably showed on my face.”