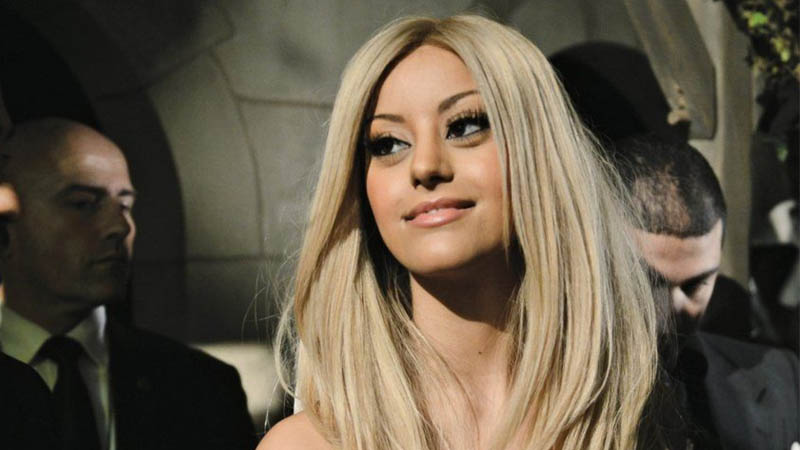 It is an impressive feat that, by the age of 21, Zahia Dehar is a top lingerie designer and the toast of the Paris fashion world. But the fact that she shot to fame – or rather notoriety – as an underage prostitute caught in a sting involving three of France’s most famous footballers, and was nearly deported back to her native Algeria as a result, demonstrates an astonishing turnaround.

In a new interview with W Magazine, Zahia Dehar opens up about that challenging period four years ago, when she was forced to make some decisions about her future. ‘I just hid out and cried all day and thought, What has become of my life?’ she said.

‘I couldn’t get a normal job, because what could I do? Take a meeting and have people say, “Oh, look, it’s you!”?’ Instead, demonstrating the drive and business savvy that appears to have stood her in good stead thus far, she decided to capitalize on her fame and launch the fashion line she had always dreamed of.

She hired a lawyer and secured an anonymous Hong Kong-based financial backer to help realize her dream of creating risqué designs that ‘help women who want to have fun with their bodies.’ And the resulting confections, launched at Paris Couture Week in January 2012, have earned her genuine credibility among the fashion world’s toughest critics.

Karl Lagerfeld photographed her for her first look book, describing her as ‘very French courtesan, like Liane de Pougy or the Belle Otéro’. And couturiers including François Tamarin, Bruno Legeron, and Jean-Pierre Ollier agreed to work with her on the one-off pieces.

Miss Dehar’s Paris atelier reveals none of the underlying grit that got her to this position though. It is described by W as ‘less a buzzing hive of garmentos than a Barbie Dream House.’ Heart-shaped cushions and giant bows are the order of the day, all in a palette of lavender and candy pink.

The purpose of all this, she tells the magazine, is to keep her happy. ‘If I’m sad, it’s impossible to think about pretty things,’ she says. ‘If I’m not feeling good, my job takes longer.’ To that end, Miss Dehar reveals that she spends three hours getting ready for work every morning, having her hair and make-up done by professionals.

Even more central to her brand, though, is her body – that body. She is her own muse, and she walks her own catwalk shows too – always dressed as a bride, the traditional way Paris couturiers close their shows. ‘Only a doll comes close to the shape of her body,’ says top fashion photographer Ellen von Unwerth. ‘She is very clever and knows very much what she wants.’

Now Miss Dehar’s designs are to be available in the U.S. for the first time, at LA vintage fashion boutique Decades. And WWD reports that stockists in New York and Tokyo are set to follow, with standalone boutiques planned further down the line. Reflecting on how the designer’s past might affect her future success, Decades owner Cameron Silver told the magazine: ‘We’re so Puritan in America, but it’s not like she murdered anyone.

‘And this is not a vanity project; there’s far too much investment and work involved.’ While Miss Dehar will not reveal who is splashing out on her wares, the front row of her shows offers some indication. High-profile guests have included actresses like Emmanuelle Béart and Béatrice Dalle.

And presumably Decades will allow the Hollywood A-list easier access to the Zahia Dehar collection. Despite her showstopping personal appearance, outrageous designs – and her teenage years on the Paris club scene – Miss Dehar says, she does not go out much at all.

She does not have a boyfriend, and at weekends says, ‘I prefer to stay at home with my dogs.’ This is just the way she likes it though. ‘I may be more restrained now in my personal life,’ she says. ‘But doing this work really makes me feel free.’

How to Lose Weight in 7 Days

Joan Collins Made a Dame by Prince Charles

Oprah Winfrey – One of the Most Influential Women of World