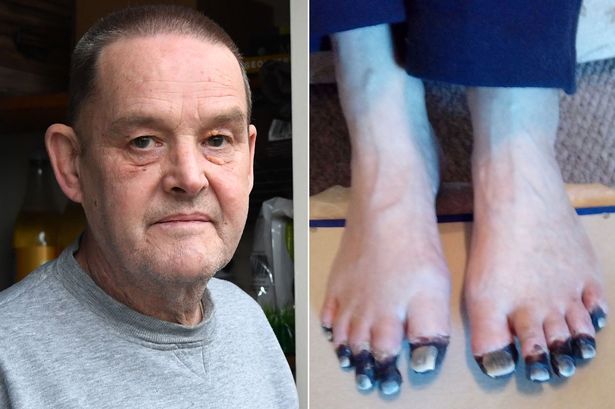 A man has said that his wife wouldn’t sleep in the same bed as him – because his toes kept falling off.

In 2018, Simon Charlesworth, 61, found himself deeply unwell in hospital with the flu, pneumonia, and sepsis.

After being taken to the Princess of Wales Hospital in Bridgend, Wales, Simon had to be put into a coma by doctors and as he slowly recovered, his toes fell off one by one due to lack of circulation, WalesOnline reports.

“My wife refused to sleep in the same bed as me as she didn’t want to wake up with a detached toe beside her,” said Simon, from Brackla, Bridgend.

“Can you imagine putting your socks on in the morning and thinking ‘I’m sure that toe was there last night’?”

Simon said he woke up one morning thinking he just had the flu before things took a turn for the worse.

He said: “I woke up one morning and I felt like I had the flu. I thought I’d have a shower and see how I felt afterwards but I ended up pulling down the shower curtain.

“My wife came home in the afternoon from work and found me virtually unconscious on the bed in the spare room.”

Simon said he can only remember “bits and pieces” from then on, including his wife helping him down the stairs, her calling an ambulance, and the moment hospital staff told him he’d need to be put into a coma.

After coming round from the coma, Simon said the first thing he recalled was the terrible state of his toes which had turned black.

“I remember looking down at my toes and wondering why someone had put black finger bobs on them,” he said.

“At some point when I was in a coma my blood pressure dropped and they gave me [medication] to increase it rapidly again.

“But in doing so it pushed blood towards the organs while starving the extremities – it’s basically like suffering frostbite.

“The soles and heels of my feet came off all bar an inner layer of soft skin, my fingers peeled, my nose peeled, but luckily it was just my toes which got it really badly.”

Following his discharge at the end of April 2018, Simon admitted that his wife of 35 years, Caroline, had to treat him “almost like a baby” for the first two months at home.

“I was basically sat in a chair dribbling. That’s probably the best way to describe me at that time,” he said.

Simon said his first black toe came off four months after his return home in August 2018.

“The actual falling off bit was not painful. I used to have a shower every day and then spray all my toes with antiseptic to try and stop any infections. The toe came off as I was rubbing it with Germolene,” he said.

“It was a shock more than anything else. Even though my toes were in a terrible state I still wasn’t expecting it to happen.”https://get-latest.convrse.media/?url=https%3A%2F%2Fwww.dailystar.co.uk%2Fnews%2Flatest-news%2Fmans-wife-refused-sleep-same-23356765&cre=bottom&cip=33&view=web

The last of his 10 toes finally dropped off around 18 months later in December 2019 – a moment of strange relief for Simon.

Commenting on the delay in his corrective surgery Greg Dix, director of nursing, midwifery and patient care for Cwm Taf Morgannwg University Health Board, said: “While we can’t comment on individual cases we are sorry if anyone has felt let down by the care or level of support received by our health board.

“As with all NHS organisations, the pandemic has created unprecedented issues for our organisation and has required some very difficult decisions to be made.

“These include pausing or limiting many services in the interests of patient and staff safety and focusing resources on responding to Covid-19 and patients who need the most urgent care.

“We recognise that postponing treatments is upsetting for patients and this is never something we do lightly. However patient care and safety has always remained of the utmost importance in making these decisions.

“Our teams are continuing to work really hard to provide this urgent care to our patients during these unprecedented times.

We are also looking at ways we can provide alternative support to patients waiting for elective treatment to help them manage their conditions and we would encourage anyone who has any concerns or worries to contact us so we can discuss their care with them.”