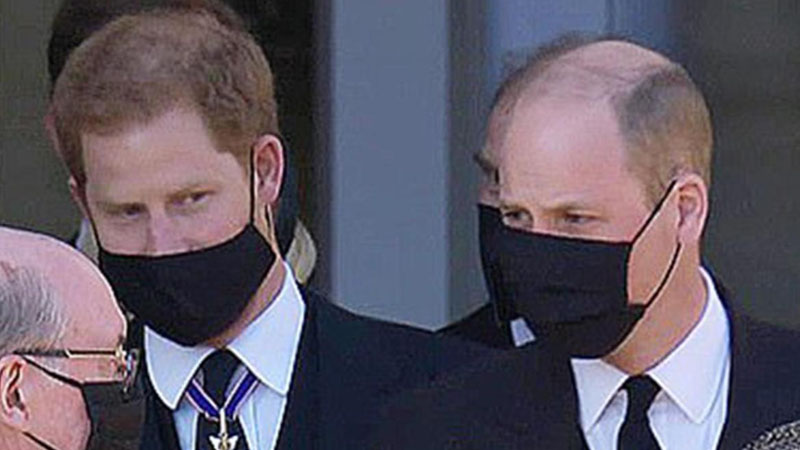 Meghan Markle didn’t show up to Prince Philip’s funeral last week, but did she still manage to come between a possible settlement between her husband, Prince Harry and Prince William? As per report Prince Harry return to California on her wife’s demand as his rift with his brother was about to get settled.

Prince Harry returned to England this week for his grandfather’s funeral for the first time since he and Meghan Markle officially stepped down as senior members of the royal family. According to a source in In Touch, “Just as William and Harry finally had a chance to start healing their rift, Meghan interfered,” adding, “Meghan called and summoned Harry back to California. It ruined everything.”

This source also doubt the reason of Markle’s absent at the funeral. Apparently, it wasn’t because the duchess’ doctor advised her not to fly from LA to London during a pandemic while pregnant, but because she was restrained from the funeral after her bombshell interview with Oprah. The tabloid’s source claimed that watching her husband walk alongside Prince William and Kate Middleton set her off.

“Watching William, Kate and Harry talking again, seeing how friendly they looked – it pushed her over the edge. Meghan panicked because she felt so powerless being 5,000 miles away. What if Kate were convincing Harry he’s made a mistake leaving the royal family and sucking him back in? What if Kate started defending herself against Meghan’s accusation that Kate made her cry?”

This set Markle into action, according to the source, “She waited a little, then started calling Harry. He didn’t answer at first, so she kept calling ­­– about 20 times! Finally he picked up, and she demanded that he return home. He agreed. Although he really wanted to stay a few more days to celebrate the queen’s birthday.” The source concludes by saying, “when Meghan says jump, Harry says how high.”

The article also claimed, Meghan Markle has left Prince Harry regretful for leaving his position in the family and the interview.

People through trashes on Markle and claim that she manipulates Harry. While it’s true that there are some serious disagreements between the Duke and Duchess of Sussex and the rest of The Firm, what this really is, is just another takedown of Markle.

In Touch, like the rest of its ilk in the United States, have an absolutely horrid track record in its “reporting” on this story, and everything else about the British Royal Family. Gossip Cop debunks stories and no one knows exactly what Prince Harry and Prince William talked about before and after the funeral.  We are sure that it is impossible to believe Markle acted like a teenager desperately calling him in the middle of the funeral.

Gossip Cop debunked the notion last week that Meghan Markle was banned from the funeral for Prince Philip from In Touch. It shows Markle a bad guy while showing Kate as a savior. It seems like a fiction away from fact-based reporting.

Same source claimed in 2019 that Meghan Markle had walked out on Prince Harry and taking their newborn, Archie, with her. It is obviously untrue, they are married indeed and ready to welcome their second child. It’s impossible for Gossip Cop, or anyone else for that matter, to trust a word they publish related to the royal family.