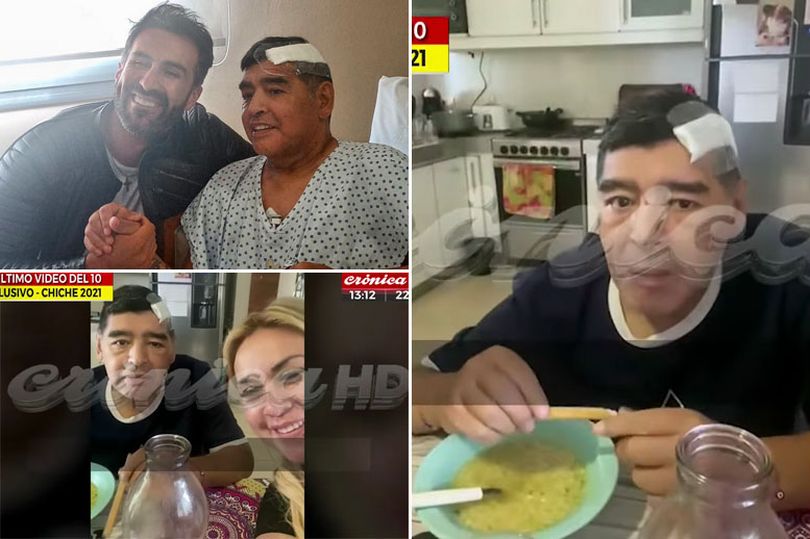 Diego Maradona slurs his words and admits: “I’m bruised” in a shocking last video of the soccer icon taken days before he died.

The former Napoli and Barcelona star, his head still bandaged after his hospital brain blood clot op, appears to struggle to find his words at times as he sends a message to his doctor from the kitchen of the rented home where he died.

He admits: “I’m bruised but okay. You know I don’t like intimacies but when I’m with good people I come out of my den.”

Showing he still had a sense of humour despite his obvious discomfort, he signed off by joking his message was meant for a retired Argentinian footballer whose name is almost identical to that of his controversial medic Leopoldo Luque.

Speaking as he tucked into a bowl of soup alongside former partner Veronica Ojeda, who was filming the selfie video, he said: “A kiss Luque. Leopoldo Jacinto Luque.” to laugher from his ex sat beside him.

His cook Romina Milagros Rodriguez who revealed at the weekend she was asked to give Maradona mouth-to-mouth after he suffered cardiac arrest, could be seen in the background.

The astonishing footage, published by Cronica TV, has been described in Argentina as the last footage of Diego before his November 25 death from heart failure.

A neighbour filmed him turning and waving to her daughter as he shuffled along the street near his rented home in another home-made video that emerged shortly after his death.

The new video emerged as leaked WhatsApp messages and audios Leopoldo Luque exchanged with colleagues and Maradona’s psychiatrist Agustina Cosachov continued to cause controversy in Argentina.

The medic and psychiatrist’s homes and offices were searched late last November as part of an ongoing probe designed to establish if there was any medical negligence in the run-up to Diego’s death.

Luque, who has denied any wrongdoing, is back under the spotlight over a series of crassly-worded messages he exchanged with Cosachov and other colleagues which have been leaked to Argentinian media.

He told a business partner on WhatsApp after Diego collapsed before it was known he had died: “The fat man’s going to end up kicking the bucket.”

He is also said to have told Cosaschov when she confirmed efforts to revive Diego were failing as he drove to the scene: “Let me know if they’re annoyed with us.”

Maradona’s eldest daughter Dalma branded him “a son of a b***h” after the messages were made public.

Prosecutors are attempting to establish if Diego was the victim of negligence after he left hospital on November 11 last year.

His daughters Gianinna and Dalma are said to have pointed the finger at Mr Luque in interviews with prosecutors.

The medic has not been charged yet with any crime and is simply the focus of an ongoing inquiry to establish if there has been any medical malpractice.

Medics are also said to have detected dilated cardiomyopathy, a medical condition in which the heart muscle becomes weakened and enlarged and cannot pump enough blood to the rest of the body.

Pulmonary edema, fluid accumulation in the lung’s tissue and air spaces, are caused by heart problems in most cases.

Subsequent blood and urine tests showed he had no traces of alcohol or illegal drugs in his blood and urine when he died but was suffering from major heart, liver and kidney problems.

They also showed up a cocktail of prescription drugs including Quetiapine, Venlafaxine and Levetiracetam which are used to treat depression, panic attack and epilepsy among other conditions.

Although some of the drugs found in his system can cause arrhythmia, the tests confirmed there is no evidence Maradona was being given medication for the heart disease he was suffering.

Last month it was sensationally confirmed Diego Maradona’s doctor used a forged signature of the soccer icon to ask a hospital for his medical records.

Handwriting experts reportedly told prosecutors they could confirm the signature had been faked after examining documents found during a search of Leopoldo Luque’s home.

Girl, 5, orphaned after watching parents fall to their deaths after slipping on snow

FDA alert: this dog food has killed more than 100 dogs, throw it away