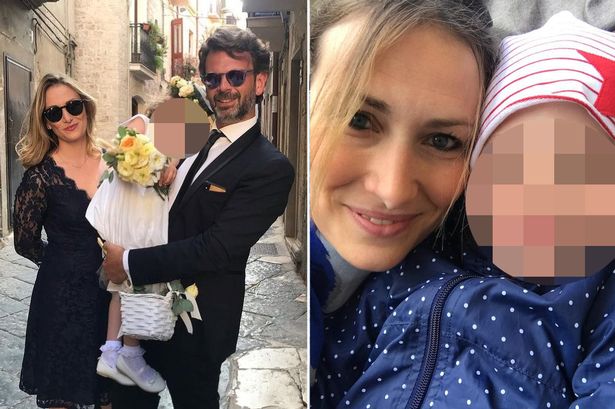 An now orphaned five-year-old watched on in horror as her mum slipped off of a cliff and fell to her death before her father rushed to save her and plummeted too.

The daughter of Fabrizio Marchi, 40, and Valeria Coletta, 35, tragically watched both of her parents felll to their deaths during a hike on Sunday, January 31.

Fabrizio and Valeria were out hiking with their five-year-old and two friends in the Italian region of Lombardy when tragic incident happened.

The group had diverted from the footpath in the Camonica Valley because an avalanche had blocked the route.

Before they rejoined the path, Colletta reportedly lost her balance while climbing over a small pile of snow and fell towards the cliff.

Her husband Fabrizio had tried to stop Valeria from falling, but fell himself and the pair tumbled over the cliff’s edge.

The two horrified friends of the couple called authorities who attended the scene.

Any rescue attempt was reportedly recorded as futile because the couple had fallen around 200m and would have died instantly.

Police, mountain rescue, the fire brigade and several volunteers from the nearby town of Brescia aided in the search for the couple.

The bodies of Fabrizio and Valeria were later recovered from the area.

An investigation into the couple’s tragic deaths is ongoing, but authorities have said that no foul play is suspected.

The couple’s friends then made it back to safety with the five-year-old, who was then handed over to her grandparents.

According to la Republic, an Italian website, the couple were buried together with two bunches of white roses at the foot of the coffin on Wednesday February 3.

The website claims a GoFundMe has been set up for the five-year-old, with donations reported to have exceed €240,000.