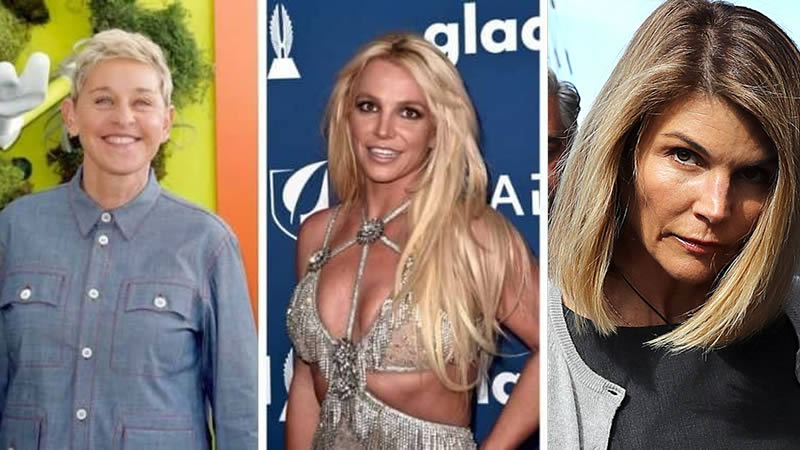 Despite celebrities spending part of the year under stay-at-home orders, there was no shortage of drama in the entertainment world in 2020. Take a look at some of the biggest scandals, in no particular order, that hit Hollywood this year.

More than 100 women came forward with accusations of sexual harassment, misconduct and/or assault at the hands of the Oscar-winning producer. In February, a jury found Weinstein guilty of rape and criminal sexual assault against two women in separate incidents. He faced between five and 29 years behind bars. The verdict and 23-year sentence was a monumental moment for the #MeToo movement as Weinstein, once considered the most powerful man in Hollywood, is now a convicted rapist.

Prince Harry and Meghan Markle step down from royal duties

The Duke and Duchess of Sussex sent shockwaves around the U.K. with their decision to break free of the royal family. The couple, along with their 1-year-old son Archie, relocated to California, first moving to Los Angeles before ultimately settling in Montecito. Although he’s across the pond, Prince Harry’s relationship — and rumored rift — with Prince William continues to capture headlines.

In a surprising turn of events, Loughlin and Mossimo Giannulli pleaded guilty for their role in the nationwide bribery scheme. The couple paid $500,000 to get their two daughters illegally admitted to the University of Southern California. The Full House star was sentenced to two months in prison while her fashion designer husband agreed to serve five months behind bars. One of the couple’s daughters, Olivia Jade, broke her silence about the scandal in December. “I know they’re good people and I know I’m not going to judge them for a mistake they made. Although it’s a big one, they’re going to pay the price for it,” the influencer said on Red Table Talk. “Regardless of what people say, I’ve seen them day in and day out and how they’ve received all of this and I know they’ve struggled.”

Once the colorful characters on Netflix’s record breaking Tiger King, such as Joe Exotic, Carole Baskin and Jeff Lowe, stepped into the spotlight when the docuseries debuted in March, they never left. Baskin continued to fight unofficial accusations that she had something to do with her ex-husband Don Lewis’s 1997 disappearance. She also danced the samba on Dancing With the Stars, but a commercial from Lewis’s family seeking information on his disappearance stole the show. Meanwhile, cast member Jeff Lowe, who had taken over Exotic’s zoo since the doc, closed the facility after the United States Department of Agriculture suspended his exhibitor license. The move followed a public report that noted the animals’ poor living conditions, and control was handed over to Baskin. Bhagavan “Doc” Antle was formally charged with animal cruelty and trafficking. Exotic’s husband Dillon Passage was arrested for a DUI in Texas in November, as Exotic himself campaigned for a pardon from outgoing President Trump. Despite all the off-camera drama, Tiger King inspired some of this year’s most popular Halloween costumes.

It was announced in June that Schroeder and Doute were fired after a racist incident with former co-star, Faith Stowers, resurfaced. Both women eventually apologized. Months later, the hammer fell on Taylor as he and wife, Brittany Cartwright, also will not return for Season 9. Newbies Max Boyens and Brett Caprioni, who joined the Bravo show this past year, were also axed due to old insensitive tweets.

A judge ruled it’s “substantially true” Depp abused Heard on more than 10 occasions during their relationship. The Pirates of the Caribbean star sued The Sun tabloid over a 2018 article that called him a “wife beater,” which led to an explosive three-week trial. Heard was the defense’s main witness as she testified about a number of alleged assaults, all of which Depp denied. The actors have publicly accused each other of physical and emotional abuse for years, but this was the first legal ruling on the matter — and fallout for Depp has been swift. He continues to maintain his innocence and is attempting to appeal the ruling.

The former adult film star is facing more than 250 years in prison for multiple felony sex crimes if convicted as charged. Jeremy faces 11 counts of forcible rape, eight counts of sexual battery by restraint, six counts of forcible oral copulation, five counts of forcible penetration by a foreign object and one count each of sodomy, assault with intent to commit rape, penetration by a foreign object on an unconscious or sleeping victim and lewd conduct with a 15-year-old girl. Jeremy, who has been jailed since his June arrest as he’s unable to post $6.6 million in bail, has pleaded not guilty.

The host with the “Be Kind” motto saw her seemingly friendly talk show be blown up amid allegations of intimidation, sexual misconduct and racial insensitivity. She didn’t face repercussions amid the internal investigation, but three producers were fired and she took responsibility because, as she said, “My name is on the show.” The talk show returned for its 18th season with some changes in place and she addressed the scandal, but the show went on a forced hiatus in December after DeGeneres contracted COVID-19.

Thanks to a candid episode of Red Table Talk — in which Jada confirmed having a romantic relationship with the singer while separated from Will Smith — “entanglement” was one of Google’s most searched definitions of 2020. (Jada was the third highest searched actor.) “I was in a lot of pain, and I was very broken,” Jada shared while an emotional Will was at the red table. The couple, married since 1997, vowed their relationship is now stronger than ever.

Raniere was convicted in 2019 of multiple federal crimes, including sex trafficking, extortion and sexual content featuring children. In October, a judge sentenced the NXIVM founder to 120 years in prison, a major relief to dozens of victims of the women-branding cult. Prosecutors argued Raniere led a secret sorority with NXIVM, a group billed as a self-help organization, in which women acted as his “slaves.” The case captured worldwide attention and was the subject of HBO’s true crime docuseries The Vow.

The “Savage” rapper was shot in her foot leaving a house party in the Hollywood Hills, requiring surgery. Megan, who was ridiculed after the trauma, ultimately confirmed reports that Lanez, a Toronto rapper, was the assailant. The two were rumored to be romantically involved. The L.A. District Attorney’s office charged Lanez with one felony count each of assault with a semiautomatic firearm — personal use of a firearm — and carrying a loaded, unregistered firearm in a vehicle. He was ordered to stay at least 100 yards away from Megan. He denied her claims.

Harris, the breakout star of Netflix’s docuseries Cheer, was arrested in September on a federal child pornography charge. The 21-year-old is accused of enticing an underage boy to produce sexually explicit videos and photos of himself. At the time, Harris’s representative denied the claims. He now faces additional counts of alleged inappropriate conduct with minors.

Fans of the Harry Potter books — and many stars from the film franchise they spawned, including Daniel Radcliffe, Rupert Grint and Emma Watson — have distanced themselves from Rowling over controversial remarks she’s made about the trans community. In June, the once-beloved author’s tweets about biological sex sparked accusations of transphobia. Rowling then doubled down with an essay expressing her concerns “about the new transgender activism” and posted new tweets criticizing hormone therapy. The inclusion of a serial killer character who dresses in women’s clothes in her latest Robert Galbraith thriller, Troubled Blood, also fueled criticism and calls for a boycott. Rowling has remained committed to her beliefs, however. In August she returned an award from the Robert F. Kennedy Human Rights organization after Kerry Kennedy denounced her “deeply troubling transphobic tweets and statements.” Said Rowling, “no award or honor, no matter my admiration for the person for whom it was named, means so much to me that I would forfeit the right to follow the dictates of my own conscience.”

The That ‘70s Show star was charged in June with raping three women in separate incidents occurring between 2001 and 2003. Masterson has denied all allegations and the actor’s lawyer called it “a politically motivated case.”

The Keeping Up With the Kardashians star turned 40 during the pandemic and just couldn’t let it go by without flying around 25 members of her “closest inner circle” to a private island (after COVID tests) for a big ol’ bash. She was slammed after sharing photos of the lavish experience, and describing herself as “humbled and blessed,” while many Americans struggled for basics like rent or groceries and the pandemic death count ballooned. Meanwhile, her husband Kanye West barely made the trip, showing up after her actual birthday for the last two days, but sending along his unusual (some say “creepy”) and also expensive hologram gift.

The #FreeBritney movement exploded as the star officially moved to boot her dad, Jamie Spears, as her conservator, a role he’s had since 2008 after her breakdown. However, he retains the job, along with new co-conservator Bessemer Trust, when it comes to running Britney’s business (she has a separate care manager overseeing her health), despite the star’s lawyer telling the judge she’s “afraid” of her dad and refuses to work again until he’s removed. Jamie, who says he’s turned around her floundering business, recently acknowledged he hasn’t spoken to Britney since August, but vows to continue to “safeguard, protect and … love [her] unconditionally.” The drama has divided the Spears family, and left her fans scouring her social media for signs of duress.

Why More People Are Getting Body Acne Than Ever

10 Things You Need to Know About the Lovely Lily James