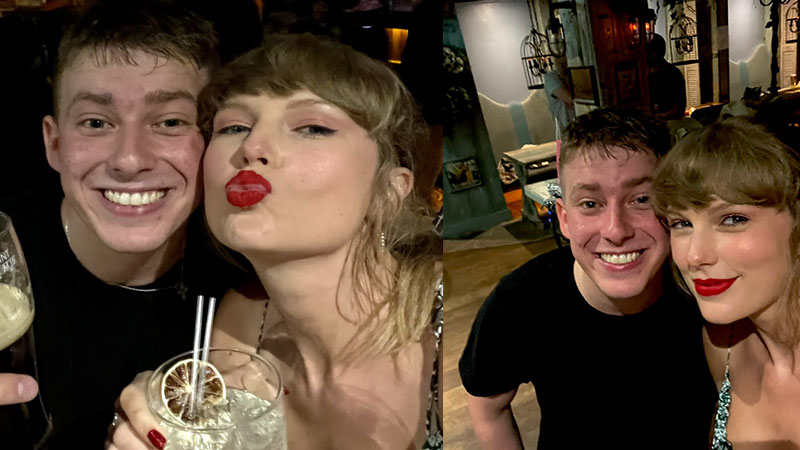 Taylor Swift recently headed for Belfast, to join her boyfriend Joe Alwyn who recently wrapped up the shooting of his upcoming series, Conversations With Friends. As per reports, Swift had joined him for the wrap party of the show and also stepped out to check out the local music scene there.

A Swiftie got an amazing chance to not only meet her but also perform in front of her and he recently shared his experience about the same on Twitter.  A Belfast musician named, Tiernán Heffron took to Twitter to share selfies with Taylor Swift and revealed how she attended his 3-hour gig at a local bar and also gave him a tip.

Calling it all a “dream come true” experience, the fan wrote, “It’s not every day Taylor Swift walks into your gig and stays for your whole three-hour set. She was the most lovely person! She asked how she could follow what I was doing and gave me a tip! Dreams do come true, ready and excited for what’s to come.”

Check out Taylor Swift’s photos with a fan here:

Taylor was also seen attending a small party with her boyfriend at a Belfast restaurant and as reported by Belfast Telegraph, the restaurant owner and staff informed the portal how she was “lovely, warm and friendly” during the visit. Not only that, but he also mentioned how she happily posed for photographs with fans and also the restaurant staff.

The Belfast restaurant where Swift attended a party also shared a post on Facebook along with a few photos of the singer during her visit and mentioned, “Taylor was here to support her boyfriend Joe who has just wrapped up filming the TV series ‘Conversations with Friends’. We can confirm she is just as lovely as you would expect and was kind enough to take a picture with our team.”