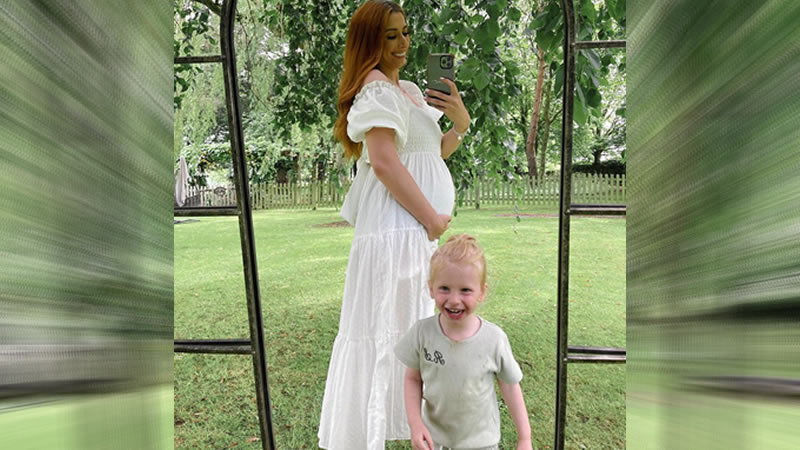 Stacey Solomon was pictured with a beaming smile as she enjoyed a stunning family day out along the Cornwall coast with Joe Swash and their son Rex.

The 31-year-old Loose Women star, who is expecting her first baby girl, also took a moment to explore a stunning waterfall as she soaked up the sunshine during the beach getaway.

Taking to her social media story, the mum of three slipped into a stunning nude one-piece swimsuit as she showed off her blossoming baby bump while frolicking in the waves.

She then posed alongside the rocks as she revealed to fans that she had clambered up to look at the waterfall that was trickling down into the sea.

In one of the pictures, the mum-to-be gently cradled her bump as she grinned while perching on the rocks in a large summer hat and her swimsuit.

“Took baby girl up to see the waterfall,” Stacey exclaimed.

Elsewhere on her Instagram stories, Stacey also shared some videos in which the trio enjoyed a completely empty beach in the sunshine.

“There’s NO ONE else here. The sun is so warm. The cove blocks out the wind and it’s just magical. And yes I have my knickers on under my costume. Swimwear is too high these days and I’m a granny,” Stacey explained.

Stacey’s trip to Cornwall came days after the former X Factor star revealed to her followers that she was expecting a baby girl in an emotional collection of social media posts.

She was over the moon to confirm that the family would be welcoming a little girl at some point later this year, sharing the news alongside a snap adorned with pink balloons.

The baby will be Stacey and Joe’s first daughter as between them they share four boys, Joe’s son Harry, 13, Stacey’s sons Zachary, 12, and Leighton, nine, and the couple’s two-year-old son Rex.

While the family can’t wait to meet the little one sometime soon, Stacey also joked yesterday that she felt a little lost because she has ‘only known boys’ until this point.

Stacey has been on quite the whirlwind journey in the last half a year after Joe surprised her with a gorgeous engagement ring at Christmas.

Just a few months later, the couple revealed that they had moved into their ‘forever home’ and couldn’t wait to transform the stunning property into their dream home.

Stacey’s recent pregnancy news also meant that the couple has decided to postpone their wedding plans until later when all of their kids can be there to watch them tie the knot.