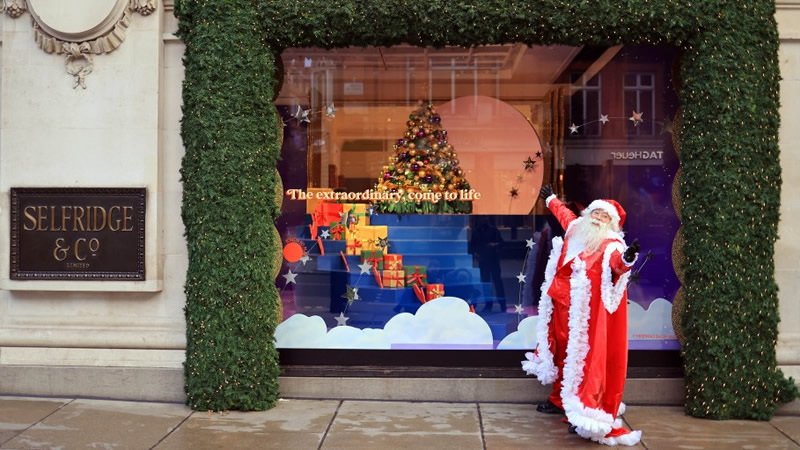 Selfridges department store is rolling out its Christmas decorations and window displays across stores in London, Birmingham, and Manchester today, and online with a digital campaign starring “Absolutely Fabulous” actress Jane Horrocks and drag artist and sculptor Juno Birch.

Under the theme “Christmas of Dreams,” the windows draw inspiration from the director and choreographer Busby Berkeley’s 1930s Hollywood visions and classic technicolor film musicals from the 1950s. A new imaginary cast of characters are brought to life in the windows, in stores, and through Selfridges’ digital campaign, in which Horrocks plays the host of a variety show.

Some windows feature one-off catwalk pieces and commissioned creations from designers such as Simone Rocha and 16Arlington.

Andrew Keith, managing director at Selfridges, said Christmas is a time of the year when the department store “brings magical moments” to the customers.

“Fueled by imagination, Selfridges is here to make Christmas shopping and gift finding special and fun, and this year, a little surreal. We know our customers have been dreaming of being together, so we are looking forward to hosting friends and families at Selfridges to celebrate even more extraordinary experiences this festive season,” he added.

Selfridges Christmas Market will open its doors on Nov. 5. Some of London’s leading food and drink traders will line the market alongside gifting stalls, fairground rides, and a giant twinkling Christmas tree. Visitors will have the opportunity to meet Santa and friends.

Do’s And Don’ts Of Parenting

When Emma Stone’s Mother Asked Brad Pitt & Angelina Jolie “Do you have kids?”