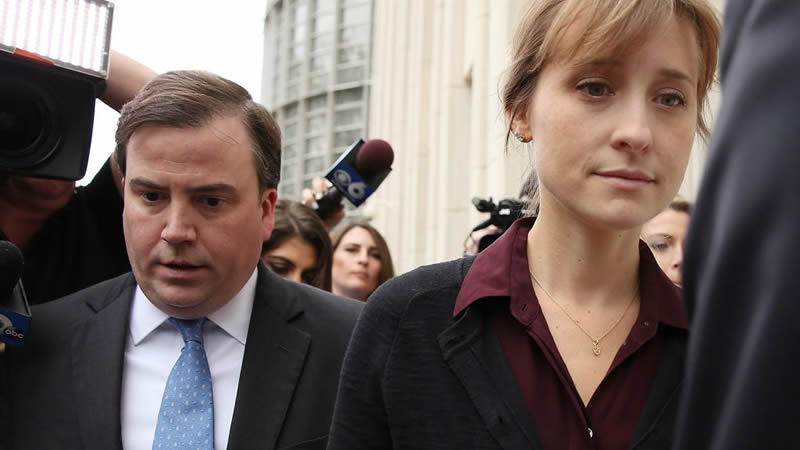 Allison Mack’s mom knew the grave situation her daughter is in and has made a last-ditch effort to save her. The desperate mom is reportedly pleading with a judge to look at more factors that could be relevant to the case when sentencing the former actress.

The mom is not completely saying her daughter is innocent, but there are factors that she deemed could keep her daughter out of prison, based on the court documents obtained by Radar Online.

Ahead of her hearing, despite their issues with each other, Mack’s mother Mindy wrote a lengthy letter to the judge asking for him to please be softer on her daughter. She said as a parent, not only was she devastated with the whole thing, she was also shocked to see Allison handcuffed in an orange prison jumpsuit during one of her initial hearings.

She also alleged that Mack only joined the group because she lost her way when she stopped acting. The former actress reportedly lost sight of who she is.

The mom also admits Allison told her about the secret women’s society within NXIVM three months before her arrest but based on her understanding, or based on what her daughter relayed, it was meant to be empowering to women.
She however said that Mack failed to mention the branding.

Mindy also revealed that Mack felt it is unfair that she is the only one being singled out when there were so many women in the sorority, and that she was merely following orders.

“In the beginning of her time with us, she was very emotional and confused about how this could have happened to her, that she did nothing wrong. In her mind, she was following Keith’s guidance in helping herself and other women to conquer their attachments and limitations. She was angry that she had been singled out for punishments when many women were equally involved in the sorority,” the letter read.

Mack’s mother then said her daughter has now turned into a new leaf and continuing to feel remorse about what she did.

“The shame she felt was crushing her soul,” the mom wrote. She revealed that Allison has enrolled in school and started working as a caterer. She also started going back to a Christian church because she really wants to start anew and learn from her mistake.

This is however, quite a very desperate strategy, because at present, it appears that there are enough evidence to make the former “Smallville” actress face 17 years behind bars, especially since she pleaded guilty herself. She reportedly played a big role in the perpetuating of the illegal activities of the sex cult NXIVM.

The organization was found to be just guising as a self-help group. They lure innocent people who are not satisfied with themselves by claiming they can get a better understanding of who they are if they join. Mack, who was found to be guided by the leader Keith Raniere, was accused of running a women’s group that is sick in all aspects. They reportedly brand all lured innocent women with Raniere’s initials and then forced them to have sex with Raniere, among other manipulative actions.

The actress was arrested in 2018 on charges relating to sex trafficking, conspiracy and forced labor conspiracy. Because she entered a guilty plea, she now faces nearly two decades of prison time. When the once promising actress was taken into custody, Mack herself cooperated with the investigation by giving evidence to prosecutors about Raniere.

This is what Mack’s camp, including her mom, is banking on. That the fact that she cooperated, she should be given even less prison time.

“Ms. Mack flew to New York from California to participate in numerous ‘lengthy’ proffer sessions, turned over relevant documents, and was the source of a critically important recording of Raniere discussing the branding of DOS members,” her attorneys wrote.

Mack’s involvement in NXIVM naturally caused a significant rift within her family, although this did not stop her mom from caring.

She moved back to live with her parents while all these legal issues against her were being investigated.

Amber Heard In Talks With Margot Robbie For A Part In Pirates Of The Caribbean Spin-off?