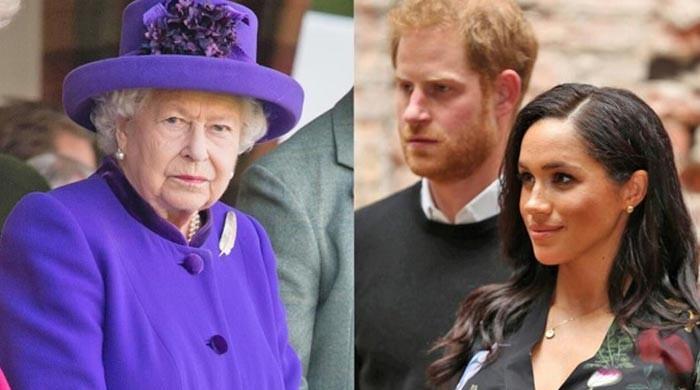 Meghan Markle and Prince Harry closed a deal with Spotify. They allegedly blindsided Queen Elizabeth and the rest of the senior British Royals.

Queen Elizabeth maintains her “never complain, never explain” motto by remaining silent. Despite the severity of the controversies, she has never opened up about her thoughts and sentiments before the public.

This is why royal experts and commentators continue to analyze the situations that have impacts on the British Royal Family and the Monarchy. One of the latest issues that many individuals tackle is Meghan Markle and Prince Harry’s Spotify deal.

In relation to this matter, the Daily Express reported that the British Monarch will likely “clip the wings” of her grandson. The assertions came from Russell Myers, who recently discussed the upcoming review for Megxit.

Speaking to 9Honey, the royal expert explained that Queen Elizabeth will not ban Prince Harry and Meghan Markle from attending major royal milestones. However, he believes that they will all make a deal that will work for all parties.

Myers continued that the British Monarch would not ban her grandson as he has already become one of the most popular members of the royal Firm. Moreover, he, alongside his wife, has already launched a “juggernaut persona,” making them even more famous in the United States. Because of this dynamic, the royal expert speculated that the Queen will definitely want to clip the Sussex couple’s wings “a little bit.”

Russell Myers, later on, noted that what the Sussexes did was an “absolute bombshell” on Queen Elizabeth’s part. Apart from the monarch, they did not also reportedly tell Prince Charles and Prince William about their plans.

The royal expert, then, asserted that Prince Harry and Meghan Markle “completely blindsided” the senior royals. Accordingly, “tensions” are still apparent among them all.

He also claimed that the review for the Sussexes’ exit deal will most likely revolve around their shocking movements in the United States. There is a lot of “water under the bridge,” Myers added.

Months after closing a multi-million deal with Netflix, the Duke and Duchess of Sussex closed another hefty transaction with Spotify. A separate report from the Daily Express recalled that the announcement, which surprised the public, dropped earlier this month.

While it remains undisclosed how much the deal is worth, reports believe that it is not as much as what they obtained from their business with Netflix. Aside from Queen Elizabeth and the rest of the British Royal Family, publications claimed that this all sparked fury and backlash from many individuals across the globe.