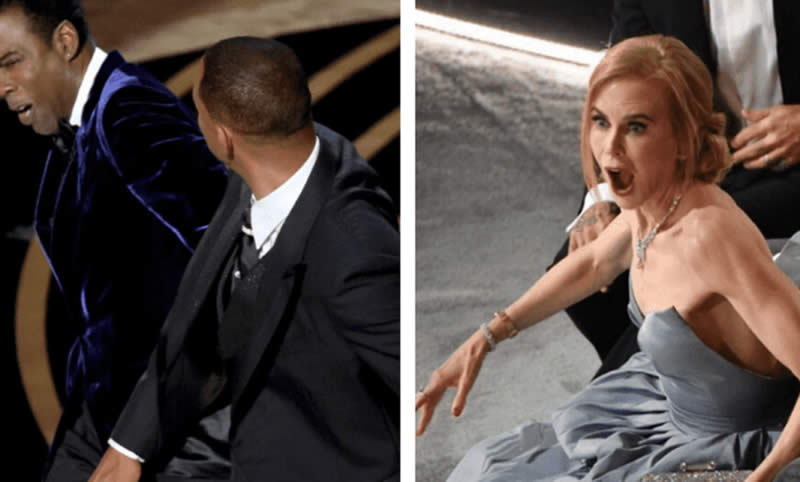 Most years, the Oscar ceremony can be pretty boring. Bar some cringe moments, nothing really of note happens throughout the night.

Viewers at home watched on in shock as the Fresh Prince himself yelled up at the comedian. And thankfully, Nicole Kidman who has cemented her place as an award season meme was on hand to channel our shock onto her face.

The Aussie actor was left literally gobsmacked when Will and Chris tussled. Well…when Will smacked Chris and Chris stood there completely uselessly.

Nicole’s shocking reaction went virally almost immediately as the Best Actress nominee had a front-row seat to the drama of the year, honestly!

Social media exploded with one user writing, ‘Nicole Kidman should win the Oscar for Best Reaction To Will Smith Slapping Chris Rock.’

‘Nicole Kidman reacting to the Chris Rock and Will Smith incident at the #Oscars. A NEW MEME IS BORN,’ added another.

‘Nicole Kidman was all of us at that moment,’ one person wrote, and honestly, that has to be the case!

‘Nicole Kidman and her husband having a front-row seat watching Will Smith slap the s**t out of Chris Rock,’ another joked.

Following the incident, one eagle-eyed spectator noted that the Australian actress headed over to Will and Jada Smith. She gave the King Richard star a hug it would seem.

Viewers were left speechless when Will stormed the stage as Chris presented an award. The comedian appeared to have made a joke about Jada Pinkett Smith, suffering alopecia referring to her as ‘G.I. Jane’.

Will and Jada, despite publicly having marital issues, have been wed for 25 years.

Perhaps Will had been watching too much Bridgerton when he stood up to defend his beloved’s honor telling Chris to ‘keep my wife’s name out of your mouth’.

Will later returned to the stage to accept the award for Best Actor for his role in King Richard, in which he portrayed Venus and Serena Williams’ father.

The tearful actor apologized for his earlier behavior without directly addressing Chris in his acceptance speech.

Quick Ways To Feel Awake In The Morning