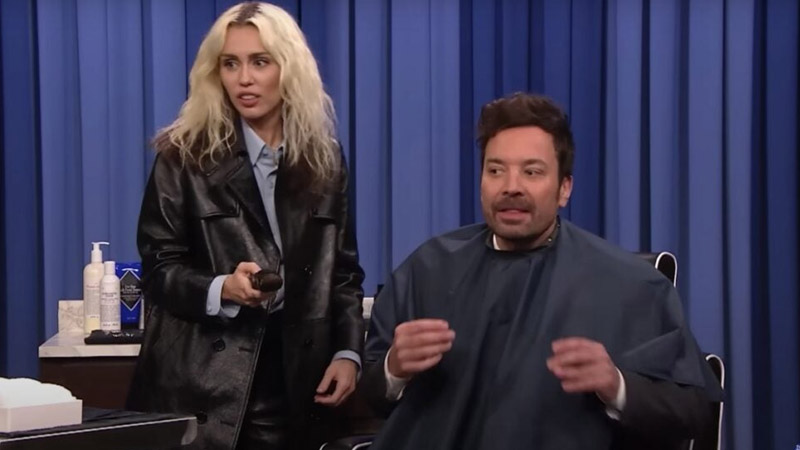 Miley Cyrus appeared as a guest on the newest edition of Jimmy Fallon’s The Tonight Show on Friday, and she created quite a fuss.

On Friday, December 9 episode of the late-night program, the singer-songwriter showed her concealed barbering abilities by shaving off the host’s beard.

Cyrus, 30, was settling down for an interview with Fallon, 48, when he said, “I want to shave my beard,” and requested her to do it.

“What do you think?” Cyrus posed the question to the crowd, who responded with hearty applause.

“Would you do it?” Fallon officially asked, to which the “Angles Like You” songstress replied, “Absolutely. Anything you need from me.”

A fake barbershop was then brought out from behind a curtain as Cyrus prepared to shave Fallon’s scruffy face.

In the Instagram video, Cyrus can be seen taking up the beard trimmer and turning Fallon around to hide him from the crowd as she works her magic.

The Plastic Hearts artist then began shaving down Fallon’s face to give him a goatee-like appearance, despite her lack of confidence.

“It’s not as bad as it looks,” Cyrus said before spinning him around to show the audience, who applauded Fallon’s new appearance.

But Cyrus wasn’t finished yet, as she wanted to shave a little more, including the thicker area around his chin, which caused a lot of the shavings to fly all around his face.

She finished by cutting his mustache and what was left of his beard before wiping all of the hair fallout off his face with a towel.

“I look like the ‘Time to make the donuts guy,'” Fallon quipped of his new look, going on to add, “I think this is a good start right here.”

“This is how you do it right here, Miley Cyrus,” he then said to the cheering audience.

During her performance, Cyrus teased her upcoming New Year’s Eve Special, which she would host for the second year in a row.

Blake Shelton on Rebalancing Life with Gwen Stefani and His 3 Stepsons: ‘I Don’t Want Any Regrets’