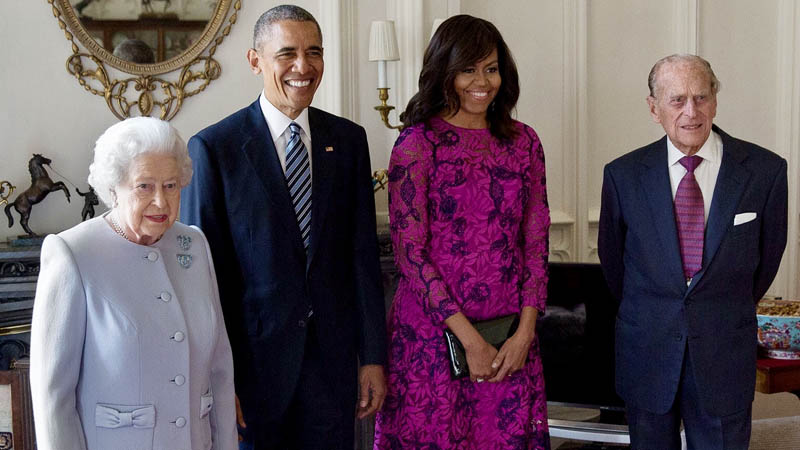 The former president, 59, posted a tribute to the Duke of Edinburgh on Instagram on Friday that included a photo of the pair alongside their wives, former First Lady Michelle Obama and Queen Elizabeth, respectively, during Obama’s time in office.

The former president released a longer statement on his Facebook page, detailing his first meeting with the duke:

When we first met His Royal Highness Prince Philip, Duke of Edinburgh, he and Her Majesty Queen Elizabeth II had already been on the world stage for more than half a century — welcoming leaders like Churchill and Kennedy; Mandela and Gorbachev. As two Americans unaccustomed to palaces and pomp, we didn’t know what to expect. We shouldn’t have worried.

The Queen and Prince Philip immediately put us at ease with their grace and generosity, turning a ceremonial occasion into something far more natural, even comfortable. Prince Philip in particular was kind and warm, with a sharp wit and unfailing good humor. It was our first introduction to the man behind the title, and in the years since, our admiration for him has only grown. We will miss him dearly.

When we first met His Royal Highness Prince Philip, Duke of Edinburgh, he and Her Majesty Queen Elizabeth II had already…

“Through his extraordinary example, His Royal Highness Prince Philip proved that true partnership has room for both ambition and selflessness — all in service of something greater,” the president said on Friday in a Twitter statement, which Michelle Obama also retweeted. “Our thoughts are with Her Majesty the Queen, the Royal Family, and the British people.”

Moreover, President Joe Biden released a statement of his own on Friday, writing, “Jill and I are keeping the Queen and Prince Philip’s children, grandchildren and great-grandchildren in our hearts during this time.”

“On behalf of all the people of the United States, we send our deepest condolences to Her Majesty Queen Elizabeth II, the entire Royal Family, and all the people of the United Kingdom on the death of His Royal Highness Prince Philip, the Duke of Edinburgh,” the White House statement said. “Over the course of his 99-year life, he saw our world change dramatically and repeatedly.”