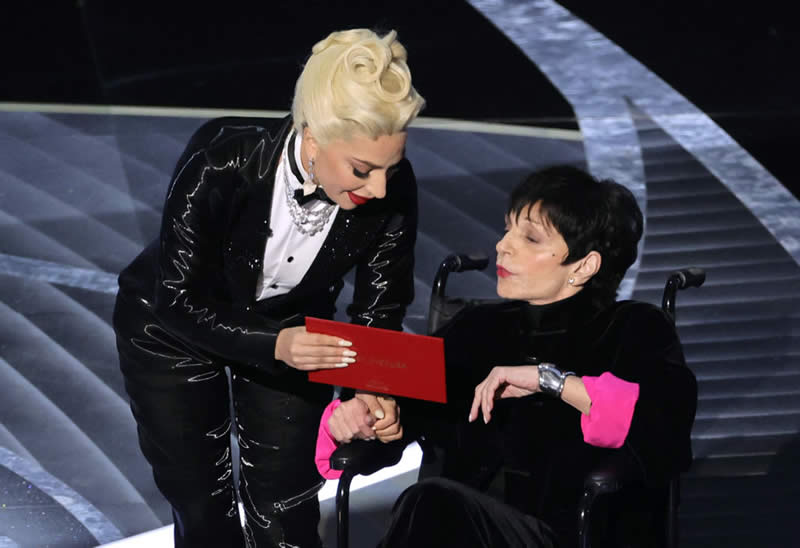 Although chaos may have erupted on stage earlier in the night, this year’s Academy Awards ended the show with an undeniably tender moment between Lady Gaga and Liza Minnelli that could not be overshadowed.

Lady Gaga whispered ‘I gotcha’ to Minnelli in a tender moment
“Good evening, you know how I love working with legends,” Gaga said as she grabbed Minnelli’s hand from her wheelchair beside her. “And I’m honored to present the final award of the evening with a true, show business legend.”

As Minnelli took the next line in the presentation, she stumbled her way through the announcement of the nominees. Lady Gaga gently took over the line to help out her friend – “We’re going to see who the nominees are now.”

Gaga then bent down to Minnelli, locked eyes with the legend, and whispered, “I gotcha.”

“I know, ” Minnelli whispered back. “Thank you.”

The sweet, quiet moment was picked up by their microphones before the sound switched to announce the nominees.

“This is like a lesson in how to facilitate older people while honoring who they are,” journalist Naomi O’Leary wrote in a tweet alongside the video clip. “What a class act by @ladygaga with legend Liza Minnelli. The conferred whispers of ‘I gotcha’ ‘I know’ picked up by the mikes made it especially touching.”

Others had similar responses to the touching moment between the two actresses and praised Lady Gaga as a celebrity people could admire.

One Twitter user wrote, “Lady Gaga has consistently shown real humanity understanding kindness support, and respect. Genuinely a super person a consummate vocal artist and performer. A person to look up to and admire.”

Others related Lady Gaga’s actions and kindness towards Liza Minnelli to the way she is with Tony Bennett.

“It’s really amazing how preternaturally wonderful Lady Gaga is with her older colleagues who have a hard time with memory and cognitive function,” journalist Kalhan Rosenblatt wrote. “The genuine care she’s taken with both Liza Minnelli and Tony Bennett is so heartwarming.”

Minnelli, 76, was at the 94th annual Academy Awards to celebrate her film Cabaret’s 50th anniversary.

Minnelli won the Best Actress Oscar award for her leading role as Sally Bowles in the 1973 film. She also became one of the few women in history to earn an EGOT, which happens when an individual wins an Emmy, Grammy, Oscar, and Tony Award.

To honor the anniversary of the beloved musical movie Cabaret, Minnelli was featured in this year’s ceremony as a presenter of the most anticipated award of the night next to Gaga.

According to Distractify, the actress was diagnosed with encephalitis, otherwise known as inflammation of the brain, back in 2020.

Although continuing on in her career and even going on to perform her own solo show in 2012, the actress now uses a wheelchair due to her serious health condition. Although Minnelli’s condition may have stunted her from articulating her lines seamlessly, the “class act” of the night Lady Gaga was by her side to hold her hand and guide her through it.

And despite Will Smith slapping Chris Rock in the face live on stage moments prior, it’s safe to say Lady Gaga saved the night with two little words that will surely not be forgotten.

Quick Ways To Feel Awake In The Morning