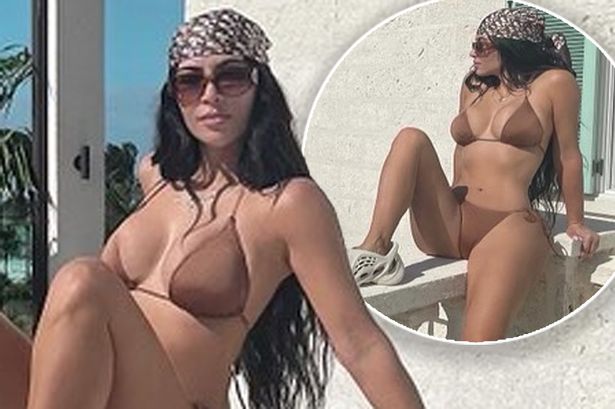 Kim Kardashian is showing that there are no worries on her shoulders amid divorce rumours from husband Kanye West.

The 40-year-old Keeping Up With The Kardashians star has followed up her time with family at Palm Beach by jetting off to Turks and Caicos for a relaxing getaway with her sisters.

She is on a “girls trip” with Kourtney, Khloe and Kylie Jenner, as they all soak up the sun in barely there bikinis.

Kim is the latest to fill Instagram with sizzling snaps of her time away as she poses in a brown string bikini while wearing a pair of Yeezys, from her husband footwear brand.

While away, it has been reported that the reality star has formulated an “exit plan” to leave Kanye behind, as her lawyers draw up final details of their divorce.

The SKIMS founder might be on the brink of an “imminent” divorce from rapper Kanye, 43, but it looked a long way from her mind as she laid back in the photos, which portray that she hasn’t a care in the world.

Within an hour, the post had brought in a million likes, as Kim’s huge fanbase showed that they were loving her carefree attitude.

Kim had previously been targeted by trolls for her ‘out of touch’ displays of wealth during the ongoing coronavirus pandemic as she embarked on a number of lavish holidays with her friends, in contrast to the guidelines surrounding the global spread of Covid-19.

Close family pals like Stassi Karanikolaou and Victoria Villarroel have also been on the holiday, along with Kardashian kids North, Chicago and Penelope.

Kim has allegedly been telling all about her “downright toxic” relationship with West.

She reportedly turned to divorce lawyer Laure Wasser last July as her and Kanye began living apart after arguing during the lockdown period.

Us Weekly has reported that that Kim has been formulating “an exit plan that would be best for her whole family.”

The source added that the couple’s “financials and properties” are going to be split in a “very fair deal” for both.

The insider continued: “Kim has all of her assets and financials ready for when she decides to file officially. Friends thought she was going to file in September, but she’s holding out.”