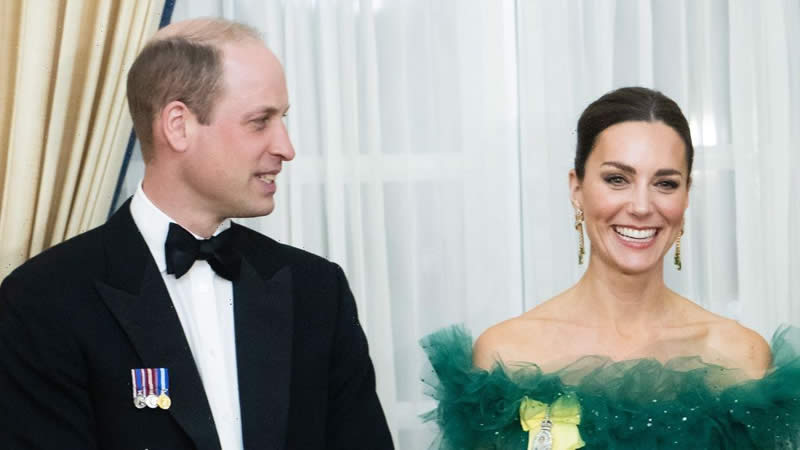 Kate Middleton and Prince William attended a reception at the Governor-General’s house in Kingston, Jamaica – and Kate wore a stunning green dress by Jenny Packham along with jewelry lent to her by the Queen

The Duchess of Cambridge looked dazzling in green as she and Prince William attended the second evening reception of their Caribbean tour.

Kate opted for a stunning Jenny Packham off-the-shoulder ruffle gown for the glittering state dinner at the house of Jamaica’s Governor-General in Kingston.

She paired the dress with emerald and diamond earrings and a bracelet loaned from the Queen, as well as her Royal Family Order and GVCO Star – although there was no tiara. She also wore her hair in a chic updo.

William, who gave a speech expressing his “profound sorrow” over the stain of slavery on Britain, also looked suave in black tie.

As they arrived and were greeted by Governor-General Patrick Allen, William told them they had a “brilliant day” in Jamaica.

Kate added that she also had a “fantastic day” and said, “thank you for having us back again”.

The couple also walked down a set of stairs in the Governor General’s house that the Queen and Prince Philip walked down in when they visited Jamaica in 1953 – recreating that moment.

During his speech, William said he “strongly agreed” with his father Prince Charles’s previous declaration that Britain is forever stained by its role in the global slave trade.

He said: “Slavery was abhorrent. And it should never have happened.”

Meanwhile, those at the dinner, sat down to a menu that included roasted pumpkin and potato soup, pimento-smoked sea bass and Suzette fanned crepes.

Earlier in the day, Kate looked gorgeous in another outfit – a white trouser suit by McQueen – as she and William met with Jamaica’s Prime Minister Andrew Holness, who made clear his country’s intention to break away from the British monarchy.

After signing the visitors’ book in the lobby, William and Kate were taken inside for a private meeting with Mr. Holness, who told the couple: “We are very very happy to have you and I hope you will have seen the warm welcome of the people.

“Jamaica is a very free and liberal country and the people are very expressive and I’m certain that you will have seen the spectrum of expression yesterday.

Kylie Jenner Clears Her Second Child With Travis Scott Isn’t Named ‘Wolf’: “We Just Didn’t Really Feel Like It Was Him”

Researchers Reveal Surprising New Way To Use The COVID-19 Vaccine