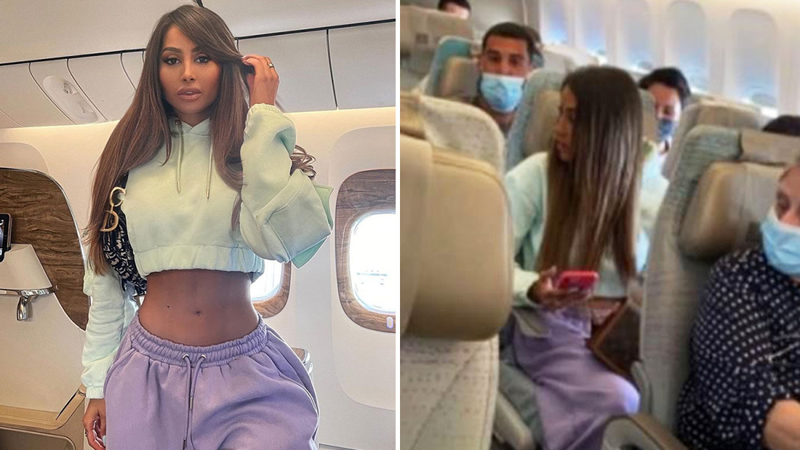 Instagram model Oceane El Himer uploaded a picture of herself stood by a business class seat on a flight, but a fan later shared their own photo of her in economy.

An influencer has been questioned by her fans after posting a picture of herself in the business class section of a plane – before ‘returning to her seat in economy’.

Oceane El Himer, 27, uploaded a photo to her Instagram profile for her 846,000 followers but a fellow passenger claimed they then spotted her taking her seat in economy.

Dressed in a green and purple tracksuit, Oceane, from Bordeaux, France, struck a model pose with the business class section of the plane visible in the background.

But a second image, which has since been shared on Twitter, shows her sitting in an economy seat with her phone in her hand, looking into the aisle.

The image uploaded by Oceane, which received more than 100,000 likes, was captioned “next Stop – Monaco Je fly toute la night”, which translates to ‘I fly all night’.

But she was ousted by one of her own fans, who shared the candid snap of her on Twitter, with the caption ‘Oceane El Himmer in economy lol’.

Then, another fan shared the image with a comment that has been translated in the Daily Mail as: “Just because she’s on TV doesn’t mean she has to fly business class.”

In the show they both competed for the affection of the same man, and since then she has appeared in other shows about the lifestyles of the incredibly affluent.

She likes to flaunt this lifestyle wherever possible, and on her Instagram profile there are a vast series of images showing her living a decadent existence.

One such post shows Oceane posing in a bikini on the edge of a boat and it was shared with the caption ‘hair in the wind’.

When she passed the 800,000 follower mark she posted an image of herself dressed head-to-toe in branded Official clothing, thanking her fans.

She wrote: “I wanted to thank you all for being a little more numerous every day to follow me, to support me, in good times as in bad times, it helps me a lot in my daily life.

“It always warms my heart to accompany you and to be by your side because today if I evolve it is thanks to you. So thank you all.”

How to Be a Better Kisser?