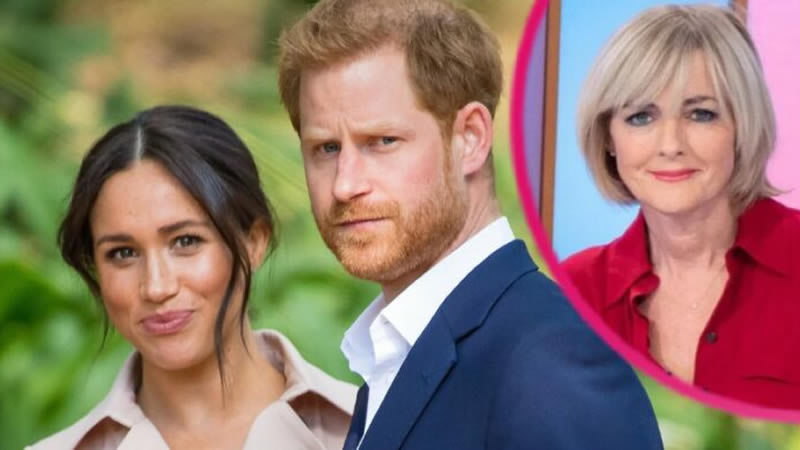 The 59-year-old ITV panellist criticised the Duke and Duchess of Sussex in her latest column.

Furthermore, she also questioned their decision to name their new baby, Lili, after the Queen‘s childhood nickname.

What did Jane Moore say about Harry and Meghan?
In her column, Jane opened up on the recent reports the Queen won’t stay silent if the couple allow “misleading” stories to circulate.

Writing in The Sun, she said: “One can only imagine how the Sussexes’ damaging slight played out behind the scenes, and how the supposedly olive-branch gesture of naming their new baby ‘Lilibet’ must grate in the extreme.

“After all, do they seriously think that’s all it will take to rebuild the bridges they blew up when they sat down with Oprah Winfrey and fired the opening salvo of their continuing ‘woe is us’ narrative?”

In addition, Jane added: “If they know that every story pushed out by their pet biographer Omid Scobie will, if wrong, be swiftly and stiffly rebutted by the Palace, it might make them think twice before betraying any more of their varyingly recollected family confidences.”

Following the birth of their daughter, the journalist made it clear she didn’t approve of their baby’s name.

She said on Loose Women: “Well, when anyone has a baby it’s lovely, isn’t it? But I don’t know, I just… Diana I get, I think that would have been really nice.

Furthermore, Jane went on: “I suppose it gives the link to the Queen, but three weeks ago, Harry was almost criticising his father’s parenting skills and saying that’s how he was parented.”

However, some viewers disagreed and called the star “miserable”.