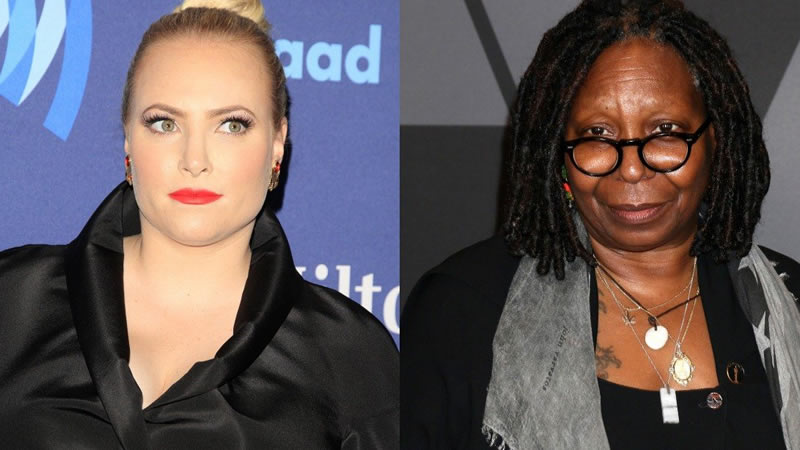 Meghan McCain and Whoopi Goldberg haven’t been having nearly as many tense exchanges on The View following a reported talking-to from the president of ABC, who called the recent slate of personal attacks “toxic.”

That streak of good behavior seems to have come to an end after the two women snarked at each other during a recent episode of the hot topic talk show. Though Goldberg is typically able to keep her cool during these blow ups, she completely lost it today.

As the talk lasered in on an apology Biden made to the controversial Russian leader, Meghan McCain and Whoopi Goldberg got into yet another argument. McCain, unsurprisingly considering her well-known conservative bent, argued that the apology showed weakness.

As Goldberg attempted to compare the current president to his predecessor, Donald Trump, McCain interrupted her. “With all due respect, with all due respect,” McCain said, raising her voice to be heard over Goldberg. “Let me just finish what I’m saying,” Goldberg said as McCain paused for a breath, but the conservative firebrand continued talking over her.

Twitter Response Is Surprisingly One-Sided
That retort was delivered as Goldberg, visibly over the argument at this point, attempted to announce a commercial break. “Well! Then, good Meghan. Then you can be how you always are,” Goldberg responded. Her remark definitely struck a chord with some viewers, judging from the response on Twitter.

The majority of recent tweets support Goldberg and are highly critical of McCain’s behavior. Some noted that even when the ladies came back from commercial break and moved on to a lighter subject, McCain still seemed a little steamed over the exchange. While her co-hosts cracked jokes and laughed with each other, McCain barely cracked a smile, even when Joy Behar compared Victoria Secret bras to slingshots.

This is just the latest argument on The View featuring Meghan McCain. She has repeatedly gotten into spats with both Joy Behar and Whoopi Goldberg on any number of topics. The on-camera arguments were getting so out of hand that the new president of Abc reportedly called a meeting with the show’s talent and producers to ask that the rhetoric get toned down.

A person with insider knowledge of the meeting claimed McCain stormed out because she took the message as a personal attack against her. Considering the fact that she’s often front and center at these fights, it’s not unreasonable for her to feel singled out.

8 Ways Smoking Can Affect Your Skin