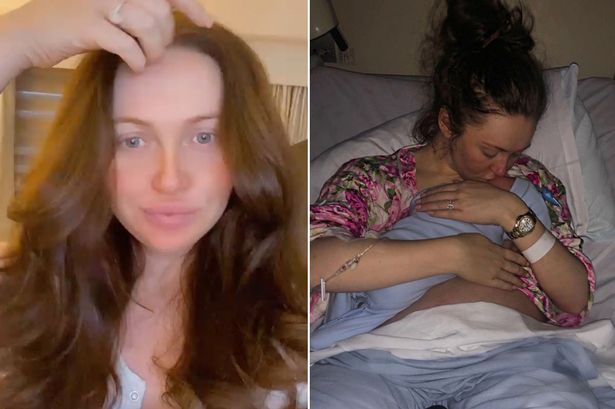 The 28-year-old reality star, who is the daughter of late comic legend Les Dawson, has included her father’s surname as her baby’s middle name in a sweet tribute.

Marking a memorable anniversary, Charlotte chose to unveil her son’s new name on what would have been her dad’s 90th birthday.

In the weeks leading up to the birth, there was much speculation about the newborn’s name after Charlotte had indicated that she would be honouring Les.

Speaking with OK! magazine, the new mum said: “Today would have been my Dad’s 90th birthday so I can’t think of a better day to share the photos of our little precious bundle of joy: Noah Dawson Sarsfield who is one week old today.”

During the interview, it was also confirmed that her bundle of joy weighed in at 7lbs 13 ounces.

The former Love Squad presenter added: “Matthew and I are so obsessed, our world is now complete and we are excited to be a little family.”

For Charlotte, seeing father Matthew in action proved to be quite an emotional experience.

She explained that seeing the pair together can make her heart “melt” at a glance.

As the TV starlet lost her father at just eight months old it’s not surprising that she would be thinking of Les during this time.

The Rough and Ready star went on: “I know my Dad would be so proud.

“I just wish he was here but I know he is smiling down on us.”

The comedian died of a heart attack before Charlotte was barely old enough to know him but that hasn’t stopped Les from being a significant part of her son’s life.

She presented her baby son Noah with a loving reminder in the form of a card, that reads: “Grandad is in heaven.”

Charlotte was the only daughter of both Les and his second wife Tracy Dawson, with the pair marrying just four years prior to his death in 1993.

However, Charlotte wasn’t Les’s only child – he shared three children, Julie, Pamela and Stuart, with his first wife Margaret.