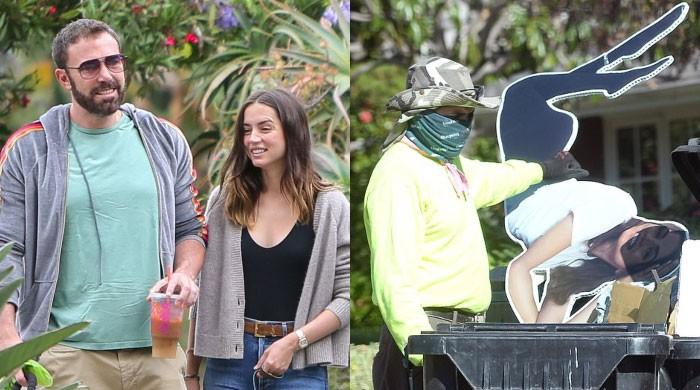 American actor Ben Affleck is quick to move on as he is discarding any remaining memories of his ex-girlfriend Ana de Armas.

A man could be seen exiting from the Oscar-winning star’s residence trashing a life-sized cutout of his former flame in the bin.

What was appalling was the fact that Ben’s kids were spotted playing with the cardboard while they bonded with the Knives Out actress last summer.

The disposal however, was no easy task. Apparently it was too big to fit in the trash can and it required two men to struggle with the fake-Ana.

With the odds stacked against them, they finally resorted to breaking the cardboard in two in order to dispose it.

The couple had decided to call it quits due to complications regarding when they wanted to live.

“Ben is no longer dating Ana. She broke it off. Their relationship was complicated. Ana doesn’t want to be Los Angeles based and Ben obviously has to since his kids live in Los Angeles,” a source told People.

A second source told the portal: “This is something that was mutual and something that is completely amicable. They are in different points in their lives; there is deep love and respect there.”

“Ben continues to want to work on himself. He has three jobs lined up and he’s a solid father at home. They are both happy with where they are in their lives,” they said.