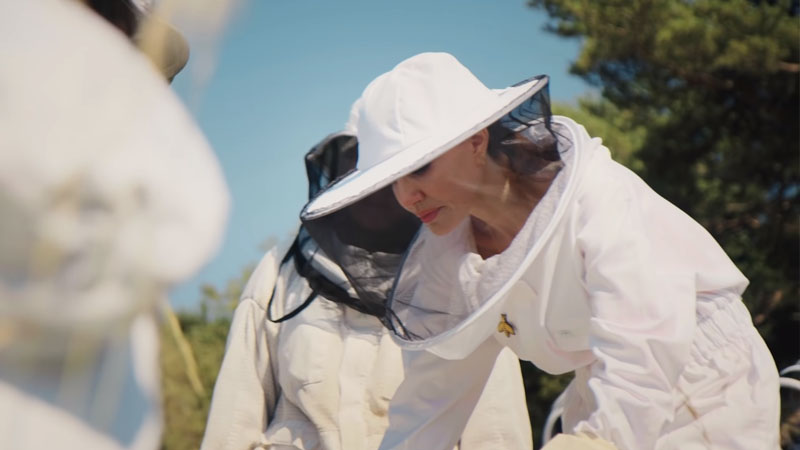 Angelina Jolie has recently revealed her plans to help amplify bee conservation and breeding. In a video shared on Vogue, the Mr. and Mrs. Smith actor has teamed up with Guerlin, OFA, and UNESCO in Provence, France to safeguard bees with the help of breeding. She also opened up on providing opportunities to women beekeepers in the process.

Sharing her take on beekeeping, Jolie noted that she thought she understood the ‘importance of beekeeping but as much as she dug into the concept, the actor revealed to have known more about saving bees to protect the environment.

“Had we did not have the beekeepers and the work of places like OFA, we would lose them [bees],” the actor explained. In the video, Jolie also donned a protective suit against the bees amid congratulating the graduates of her Women for Bees project.

Jolie said that she wanted to help save the bees and ‘improve the situation.’ She revealed having important questions in mind including what measures could be taken to help bees and women in society. Jolie’s initiative focuses on increasing worldwide biodiversity and increasing the interest in beekeeping and opening up avenues for beekeepers.

According to UNESCO, via ET Online, Jolie’s Women for Bees project also has a strong focus on strengthening female entrepreneurship, along with the practice of “theoretical and practical bases of beekeeping.” Towards the end of the training, participants would also learn the nuances of becoming ‘fully professional beekeepers-entrepreneurs’ while also being a part of the “internal network of female beekeepers.”

Kourtney Kardashian Has Found A Great Boyfriend In Travis Barker?