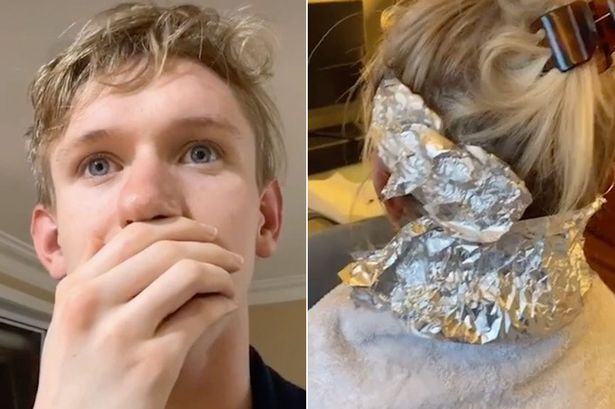 A return to lockdown means our hair styling needs will once again be taken out of the hands of trained professionals and given to literally anyone in our household willing to take a shot at it.

But one mum who roped in her son to help bleach her roots was left less than impressed with the results – and it may act as a warning to us all.

It begins as he dons a pair of black gloves, putting the treatment onto his mum’s hair and quite literally slapping on some tin foil, before saying the instructions advise leaving it in for an hour, adding: “I think it’ll look great. I feel like people won’t even notice that I did it.”

But as it jumps to the big reveal, his face drops as he realises his mum’s nicely blonde-highlighted hair is now one yellowy colour, as she warns: “Don’t film me, I don’t give you my permission.”

To add insult to injury, he places his hand over his mouth and comments: “No, you look like the White Witch from Narnia.

“You’re starting to look like SpongeBob SquarePants’ house, the pineapple.”

His mum replies to say: “I told you to make sure you put a lot on the top,” as he answers: “Yeah, I tried, but I failed. Sorry. I love you.”

Posting the video on social media, he joked: “People are having a go at me because I said dying instead of bleaching. Can you clearly see I have no idea what I am doing let alone [the] terms.”

Viewers took to the comment to advise that toner and purple shampoo would be his best friends moving forward if he wanted to try and help rectify the mistakes he made the first time.

One joked about the reassuring comments he had given his mum, writing: “Way to lift the mood.”

A second attempted to support him by saying: “You tried your best and honestly could be much worse.”

And another added: “I’m so sorry for laughing.”

Braid Style Tips for Women in 2015