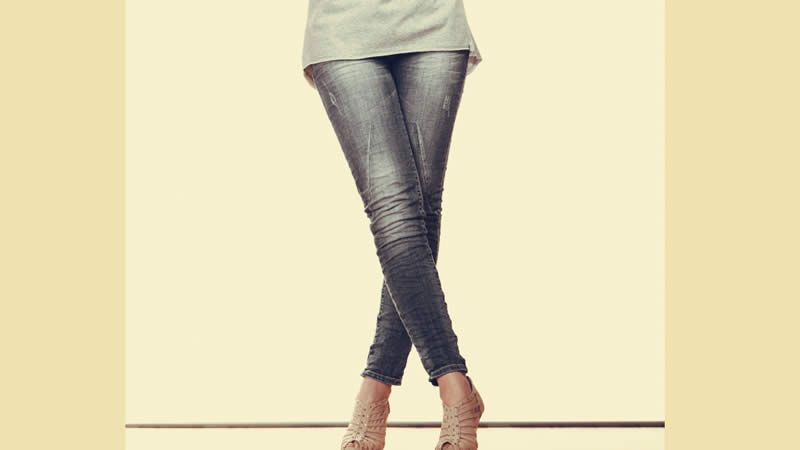 If you’ve ever done any serious moving in skinny jeans, you’re probably aware that they can get pretty uncomfortable. (They’re definitely not yoga pants.) You probably didn’t know, however, that tight skinny jeans can also get dangerous. In a new case study published in the Journal of Neurology Neurosurgery & Psychiatry, doctors highlight a 35-year-old woman who arrived at the Royal Adelaide Hospital in Australia.

She presented with weakness in both ankles and feet, so much so that she was unable to walk. She also suffered severe swelling below the knees in both legs, so much so that doctors had to cut her jeans off the previous day. She recalled to doctors that the issues had begun the day before, when she was helping a relative move and spent hours squatting to empty cupboards.

She’d been wearing skinny jeans at the time, and remembered they grew increasingly snug and uncomfortable the longer she had them on. The doctors determined her symptoms were the result of nerve damage in both legs, due to two factors, according to study author Thomas Kimber, MD, a neurologist at the Royal Adelaide Hospital and associate professor in the Department of Medicine at the University of Adelaide.

Read More: The Grunge Style of the 90’s

This resulted in compartment syndrome, which occurs when there’s increased pressure within one of the body’s “compartments”containing muscles and nerves. The pressure decreases the blood flow that provides key nourishment and oxygen to cells, causing them to swell and further damaging the already-swollen muscles. You can think about it this way. If the woman had been wearing loose pants or sweats the previous day, Kimber explains, the calf muscles could have swollen “outwards rather than inwards, avoiding pressure on the nerves and blood vessels.”

Since there has never been a previous report of squatting alone causing tibial nerve damage or severe calf muscle swelling, the doctors determined skinny jeans were a major contributor. The fix was prolonged, but simple: the woman was put on an IV drip for four days, before being discharged from the hospital. “This was required, as the muscle damage had caused a condition called rhabdomyolysis — or, severe breakdown of muscle fibers — which might have damaged her kidneys if not treated with IV hydration,” Kimber says.

What’s the lesson here? Kimber says not to squat for any length of time while you’re wearing skinny jeans. If you’re compressing your legs at all in tight pants, don’t ignore discomfort. “If you experience leg discomfort or tingling, you should stand up and walk around,” he says. This isn’t the first time skinny jeans have been accused of being unhealthy. Dr. John Michael Li, a neurologist at Rush University Medical Center in Chicago, told CBS Miami that people can suffer from “tight pants syndrome,” or abdominal discomfort, heartburn and belching.

They can also cause meralgia paresthetica, or a feeling of numbness running down the leg. And men should be extra careful when donning skinny slacks, as they can bring on testicular torsion, which is where one testicle gets twisted, hampering circulation, causing severe pain, swelling, and — in extreme cases — causing the testicle to die. Ouch! Ultimately, consider this case a pretty great (and healthy) excuse for wearing boyfriend jeans, yoga pants — and embracing this season’s wide-legged pants trend.

Health Benefits of Humor and Laughter