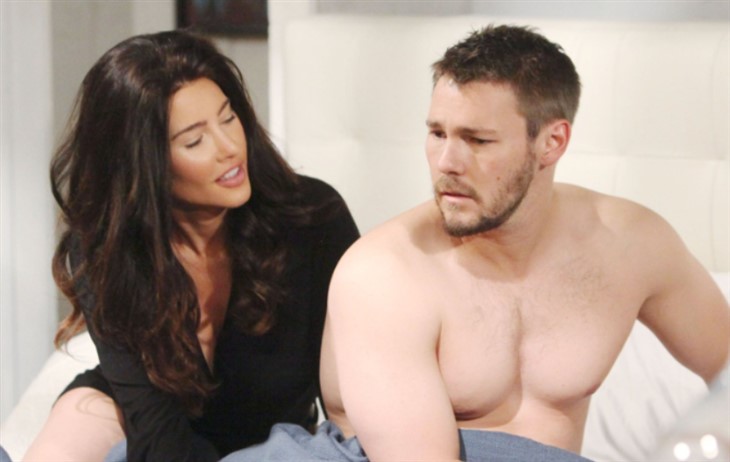 The Bold and the Beautiful spoilers reveal that in Los Angeles after sleeping together, Steffy Forrester (Jacqueline MacInnes Wood) tells Liam Spencer (Scott Clifton) that he needs to go back to Hope Logan (Annika Noelle) and work things out.

She also begs him not to say anything about what they did. However, could Liam’s guilt compel him to confess the truth to Hope? B&B spoilers reveal that Liam thinks Hope betrayed him with Thomas Forrester (Matthew Atkinson). Now, fans know that “Thrope” were not kissing, that it was actually the mannequin.

However, Liam (Scott Clifton) didn’t stick around to find out. Instead, he rushed back to Steffy’s house and starts chugging tequila. Steffy joins him and soon, the two are drunk and end up in bed together. After “Steam” gets frisky between the sheets, Steffy (Jacqueline MacInnes Wood) feels tremendous guilt.

She has no interest in getting back together with Liam. She wants to move forward with her relationship with Dr. John Finnegan (Tanner Novlan). However, she’s afraid if Finn finds out, he will break up with her. So, Steffy urges Liam to go back to Hope and make his marriage work. She also asks him not to say anything about what they did.

The Bold and the Beautiful spoilers from Soap Opera Digest reveal that Liam will initially agree not to say anything. At first, he keeps his promise to Steffy. When he goes home, he lashes out at Hope (Annika Noelle) for cheating on him with Thomas. She has no idea what he is talking about and tries to explain.

However, he doesn’t stick around to listen to what she has to say. Instead, he storms off and Hope is left feeling frustrated and confused. Executive producer and head writer Bradley Bell previously told SOD that Liam would really struggle.

He will lean on his brother, Wyatt Spencer (Darin Brooks). However, the guilt will eat him alive, especially when he finds out that Hope never kissed Thomas. He could end up blurting out the shocking truth to Hope. Will she end up confronting Steffy and telling Finn? We will have to keep watching the CBS soap opera to find out how this storyline develops over the next few weeks.

Be sure to catch up on everything happening with B&B right now. Come back here often for The Bold and the Beautiful spoilers, news, and updates.

5 Reasons Why You Should Forgive