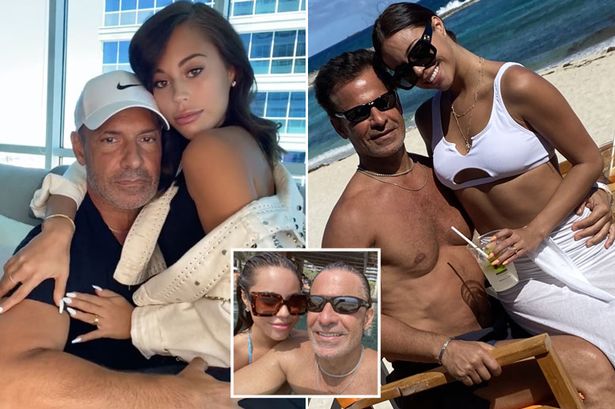 A 22-year-old woman who is dating a man older than her parents has opened up about their life in an age-gap relationship.

Alyssa Gutierrez and her partner Peter, 56, a professional sports gambler, from Las Vegas, met on a sugar daddy dating website when Alyssa, a hairstylist, was 20.

She joined with the aim of finding an “older” man who would act like a gent and spoil her, but Alyssa insists the relationship is not about money.

She explained: “I have always been attracted to older men.

“Crazy to say but ever since I was little I always knew, I had crushes on my dad’s friends or older brother’s friends.”

The couple have now been together for three years.

“When Alyssa walked up the restaurant stairs for our date, I totally perked up and was just mesmerised by her beauty.

“Alyssa is such a kind person, and wasn’t trying to take advantage of my wealth like many other girls.”

Smitten Alyssa added: “Right from the start, it was the way he carried himself, obviously, he’s very attractive and physically fit – also charming, young at heart and easy to talk to.

“My parents were divorcing at the time; I either had the choice to move in with one of them or go on my own, I was ready to leave and be on my own.

“I told Peter all about it, I was already looking at a new apartment and in the works of getting it set up, then he literally offered for me to move in with him – he had an extra bedroom and bathroom in his high rise condo.”

With Peter being her oldest partner, Alyssa was worried about what her friends and family would think as well as Peter’s children, Payton, 20, and Jenna, 22.

Alyssa said: “Peter is older than both of my parents, but after a year and a half, I told my family and they were accepting of it.

“I don’t get to spend much time with [Peter’s children], but the times I have it’s been nice, they accept our relationship.”

Alyssa claims that the relationship works so well because Peter knows how to treat a woman both in and out of the bedroom.

She said: “I love the thought of security, stability and loyalty in our relationship.

“Obviously, we have great sex. He knows how to please me, though that’s not to say I haven’t taught him a couple of things.”

Peter also gave his thoughts on relationship age gaps: “I just get along so well with Alyssa – there is such strong physical and emotional chemistry.

“I did not expect or desire to have a long-term relationship with such a young girl, it just happened.”

Unfortunately, the couple do get funny looks while out, but no longer take any notice of it and are planning to get married and have children.

Alyssa said: “We plan on marriage, we’ll hopefully be engaged this year.

“We do talk about kids too, but I’d like to be set in my career path before children. I’m thinking when I’m around 25 or so.”

Alyssa explained: “It’s really a beautiful thing to see girls coming to me for advice, tips and how to help with them with being in similar relationships, and of course, you have that other 15% of haters and trolls.

“On TikTok, they will mostly joke ‘is that your dad?’ and ‘I don’t do that with my father’.

“A lot of haters say I have ‘daddy issues’, when in reality I have a great relationship with my father.

“Do what you want and date whomever you want, as long as you’re happy.”

Flirting on a Date