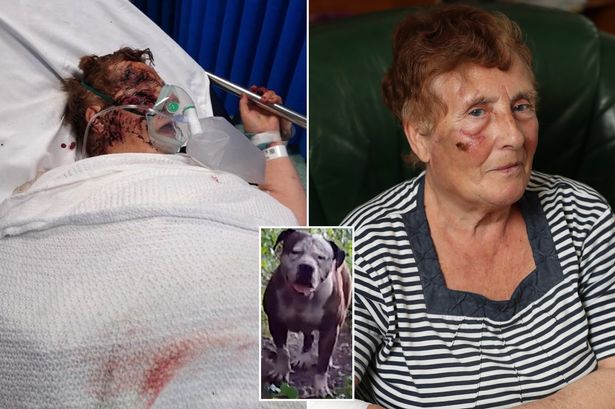 A pit bull owner has been jailed after his trained fighting dog mauled a 74-year-old pensioner “like a lion dragging an antelope”.

Daniel Cleary, 32, had only owned the American Pit Bull Terrier for a week before it grabbed an elderly woman by the coat in Yeadon’s Nunroyd Park, Leeds.

It took five men armed with a steel pole to beat the dog away from Mary Rollinson.

The pensioner could not escape when the dog slipped its collar and headed towards her.

The 25kg animal attacked the victim for about half an hour as she screamed so loudly that men working in a nearby factory heard it and rushed to the park to help the woman, Leeds Live reports.

They ran to the park to get the pit bull off the woman and one of them was also bitten during the incident.

Leeds Crown Court heard the victim suffered severe injuries including the loss of a finger and muscle damage.

The victim’s partner Trevor Cornwell, 72, said: “The injuries it caused are horrific, not like anything I have ever seen from a dog attack.

“The agony she has been through and trauma of that will always stay with her, I’m just doing my best to look after her, it’s a miracle she’s still here.”

The pit bull’s owner Cleary, 23, was jailed for two years and seven months on Thursday after pleading guilty to owning a dog dangerously out of control when a person was injured and breaching a court order.

He had previously been banned from owning an animal for 10 years as a youth due to neglect, Mail Online reports.

Prosecutor Carmel Pearson said the victim, an avid walker, was walking in woodland off Kirk Lane when the dog attacked her at around 9.40am on August 27 last year.

She said men working in a nearby factory heard her “chilling” screams and found her lying in a muddy pond when they arrived at the park.

The men tried to get the dog to release its grip on the victim by kicking it in the head and hitting it with a metal pole, which it then bit.

Miss Pearson said one of the men was bitten during the incident but did not initially feel it as he was “so intent on rescuing her”.

The dog calmed down after chasing one of the men who jumped over a wall to escape.

Cleary then appeared at the scene by himself and showed concern for the victim.

Police were called and the defendant said the dog’s collar was too thin for it, the collar had slipped off, the dog got hold of the woman’s coat and he ran away to get help.

He said his girlfriend had bought him the dog a week before the incident after it had been trained to fight by a previous owner.

Cleary told officers to put the dog down following the attack.

The victim lost the middle finger and dexterity in her left hand as a result of the attack.

She suffered muscle damage in one of her arms and needed a skin graft and a blood transfusion.

She also needed stitches for a bite to her right cheek and suffered bites to her body.

In a victim personal statement, the woman said she loves dogs and does not want it to be put down.

She added she is glad it attacked her rather than a child.

The defendant, of Melbourne Grove, Bramley, had been banned from owning animals for 10 years as a youth due to neglect.

She said he has alcohol misuse issues and the delay in the case has had a tremendous effect on him.

Judge Neil Clark ordered the dog to ‘destroyed’, saying it had not bitten during an assessment in which it was taunted but it still could not be safely re-homed.

Cleary was banned from owning animals for a further 10 years starting today.

Sentencing, the judge said: “This was a particularly vicious attack.”

Det Insp James Entwistle, of Leeds District CID, said: “This was a truly appalling incident where the elderly victim went through an absolutely horrendous ordeal being mauled by this large and powerful dog while she was out for a walk in the park.

“She suffered very serious and significant injuries that have required long-term medical treatment and has been left understandably psychologically traumatised.

“A number of nearby members of the public bravely went to her aid and managed to get the dog off her and I would like to pay tribute to the courage and community spirit they displayed during this incident.

“The lengthy prison term that Cleary has received should serve as a stark reminder to others of how seriously offences such as this will be treated, and we hope it will provide some level of reassurance to the victim who is having to live with the consequences of his irresponsible actions.”