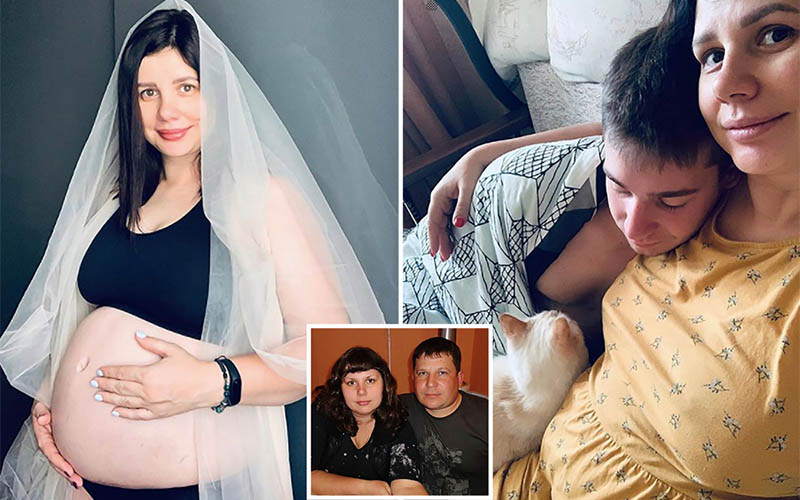 A weight-loss influencer who traded in her husband for her stepson and is now heavily pregnant with his baby, has admitted to getting plastic surgery to remain attractive for him.

Marina Balmasheva, 35, has known Vladimir ‘Vova’ Shavyrin, now 21, since he was seven years old, with their relationship developing after he returned from university two years ago.

She was previously married to her new toy boy husband’s dad Alexey Shavyrin, 45, and has left him to care for their five adopted children.

However, the Russian blogger insisted on a prenup before tying the knot with Vova in July so that she keeps all of her money and assets in the event of a divorce.

Marina previously shared before and after photos with her half a million followers, explaining she underwent abdominoplasty a year ago to remove excessive skin after losing nine stone.

Her other cosmetic procedures include face and neck lifts, a blepharoplasty, and botox on her forehead.

“How a person can change,” she boasted.

She said: “So many people tell me to use makeup – make lashes, and curl my pubic hair – because of my young husband.

“But there is one thing – he fell in love with me with all my scars from plastic surgeries, cellulite, excessive skin and personality.

“And I do not want to seem better than what I am.”

Alexey previously said the blogger “seduced my son” – who had never had a girlfriend before – and claimed: “They were not shy to have sex while I was at home.”

He added he could have forgiven her cheating if it hadn’t been with his son.

However, Marina has described her previous marriage as “not living but pretending”.

She told her followers: “Did I have regrets that I destroyed the family? Both yes and no.

“I was ashamed that I killed the stability of ‘mum and dad’.

“Did I want to return to my ex? No. Do I feel anger and hatred to him? Not any longer.”

She went on to describe Alexey as a “good person and a wonderful father”, and said their children took to the changes “absolutely calmly”.

But she does admit Vova, a trainee manager, is “only beginning to settle down” and “admits that it is me who earned for our car and first mortgage payment”.

“While he is finding his feet, all expenses are on me,” she continued, adding she got the prenup because “I am not his sponsor”.

“We know clearly who is earning what. I knew what I signed up for, and so did he…I will simply guide him and support him.”

Marina said they may have another child in future, adding that Vova’s mum – another ex-wife of Alexey’s – is happy to help care for the new baby.